Blue Ivy is reportedly launching her own cosmetics line

The world may be currently obsessed with Beyonce's incredible pregnancy announcement, but we mustn't forget about the original Knowles-Carter baby, Blue Ivy.

Not content with becoming  big sister to twins, (which people suspect will be a girl and a boy) Blue Ivy has got business on her brain.

Okay, so it's probably more her parent's idea but we'd like to think they ran it by her first.

Beyoncé’s company is planning to launch a line of Blue Ivy Carter products according to TMZ.

The products could range from cosmetics to hair care, to clothing and possibly even games. 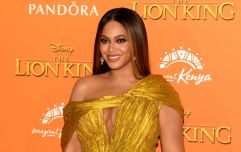 END_OF_DOCUMENT_TOKEN_TO_BE_REPLACED

The company have filed to trademark Blue Ivy's name for official use.

This is not the first time Beyoncé and Jay Z tried to trademark their daughters name. In 2012 the musical couple sought to own the name Blue Ivy but lost because a wedding company already had it trademarked.

This time, their adding her surname, Carter, which should work as we doubt there are many others with that name.

We reckon the power couple will give the twins some interesting names too, and get them trademarked right away.

We would like to share our love and happiness. We have been blessed two times over. We are incredibly grateful that our family will be growing by two, and we thank you for your well wishes. - The Carters

popular
Paul Mescal wore O'Neill's shorts while carrying cans of pink gin so I bought O'Neill's shorts and cans of pink gin
This amazing hanging egg chair is coming into Aldi next week and go, go go (but safely)!
Women and girls struggling with access to period products during #Covid-19, research shows
5 reasons why we need more videos of Doireann Garrihy's new puppy immediately
After days of silence, Scott and Sofia finally comment on the break up rumours
Her Quarantine Quiz Week 9: Iconic Irish music videos
Cristiano Ronaldo has been called 'racist' for his latest Instagram post
You may also like
3 months ago
WATCH: Beyoncé performs at Kobe and Gianna Bryant's memorial at the Staples Center
4 months ago
Did you spot Beyoncé proving yet again why she's Queen Bey at the Golden Globes last night?
5 months ago
Beyoncé has opened up about suffering a painful miscarriage before the birth of Blue Ivy
5 months ago
Beyoncé gives 'zero f*cks' about her fluctuating weight - and you should too
7 months ago
Beyoncé's dad Mathew Knowles reveals breast cancer diagnosis
7 months ago
One Republic's Ryan Tedder says that Adele and Beyoncé collaboration was just a joke
Next Page