Bono admits to Ellen Degeneres that joining U2 saved his life

It was the first time any U2 members appeared on The Ellen Show.

And while it seemed like they had a bit of a laugh while sitting on Ellen's couch, the conversation was quite serious too.

Bono and The Edge joined the chat show host this week and the pair recalled meeting in school and now The Edge's late mother was U2's first roadie. 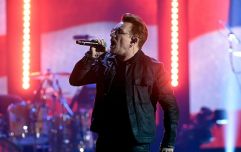 END_OF_DOCUMENT_TOKEN_TO_BE_REPLACED

Talking about their old school days, The Edge said: "Early on, your lunch was not safe. Bono never had a lunch so he would borrow from other people's."

While Bono explained: "I was a bit of a stray dog, my mother died when I was a kid, I was just a scavenger. It’s no joke to say it, nothing drives me crazy about them in any real sense because genuinely they kind of saved my life,"

"I really felt as a teenager, I had no reason to exist until I found them. And they also supplied food and refreshments. I don't know if this is interesting but my missus, Ali, I started dating her the same week I joined U2 and that was a great week."

That week was certainly a great one for Bono!

popular
Nicola Coughlan lands "lifelong dream" role as she gets cast in Oliver Twist
Made In Chelsea's Maeva and James announce birth of first child after difficult labour
Stevie Nicks leads tributes following the death of Christine McVie
Here are the first four people officially heading onto Dancing With The Stars
Mollie King announces death of her father just weeks after welcoming her first child
Gwen Stefani reportedly pregnant with baby number four
Gifts for Him: 18 affordable presents for your old fella, brother or boyfriend this Christmas
You may also like
2 years ago
Bono has revealed that U2 bought €10million of PPE for Ireland's frontline workers
5 years ago
YAS! Saoirse Ronan is going to host the next episode of Saturday Night Live
5 years ago
Noel Gallagher's hilarious story of going on a session with Bono in Dublin
5 years ago
Ireland's richest people have been revealed and some will surprise you
5 years ago
U2's Adam Clayton has welcomed his first child with wife Mariana
5 years ago
Heading to U2? Here's the weather, stage-times and set-list
Next Page