Cassie Stokes has said she is "excited for the next chapter" after the news that Xposé is set to come to an end after 12 years on the air.

The presenter fronted the beloved series alongside Glenda Gilson and Nadine Reid - and admitted that while she was sad to see the show come to an end, "I've had a brilliant three years."

"I've been so lucky to work with such an amazing team.

"I had the chance to swap tattoo stories with Helen Mirren; sing in a hotel room with Heidi Klum and Rachel McAdams - aka Regina George - complimented my top (Pennies hun)!

"[I'm] grateful for all the stories and I'm excited for the next chapter.

"If anyone wants me, I've some extra time for the next while, let's go for tea." 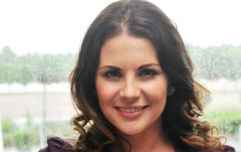 END_OF_DOCUMENT_TOKEN_TO_BE_REPLACED

Virgin Media Television announced on Tuesday that the beloved TV show would be coming to an end after 12 years on air.

Xposé's final episode will air on October 4, with a one-hour special.

In addition ITV’s This Morning and Loose Women, will end their run on Virgin Media Television on the same day.

"I would like to pay tribute to the Xposé team and all who worked on the show over the last twelve years. Xposé set the standard for entertainment reporting in an era before the proliferation of social media and leaves behind a genuine legacy in Irish entertainment journalism.”

popular
Baby found unattended in pram in Dublin, Gardaí reveal
Joanna Cooper heartbroken after her mum is diagnosed with dementia
Love Island first look: The Hideaway is open tonight as Ron has something to tell Lana
Toddler tragically dies in Wicklow following choking accident
No plans to abolish homework, says Minister Foley
Gwen Stefani reportedly pregnant with baby number four
Conor Mcgregor hit by car ‘at full speed’ while cycling
You may also like
3 years ago
Glenda Gilson lands new Virgin Media Television job after Xposé axing
3 years ago
It's official: Xposé is coming to an end after 12 years on the air
3 years ago
Karen Koster leaves Xposé to move to another TV show
4 years ago
We need Cassie Stokes' €41 sequin dress in our wardrobes ASAP
4 years ago
Bláthnaid Tracey has been announced as the new host of Xposé
4 years ago
Glenda Gilson won Look Of The Night at the VIP Awards rocking a black jumpsuit
Next Page