"I might even run out of tissues and have to start using all of my money to wipe the tears..."

Last night, Charlotte Crosby ruffled a few feathers on Twitter when she took to the platform to call her hometown, Sunderland, a "dive" following a stabbing in the area.

Locals of the area, however, were not impressed with her views and some made sure she knew it.

One follower, Liam Mutimer, decided to go in on Charlotte, telling her she was only using the incident as a "scapegoat for comments", he continued by saying:

The Geordie Shore star decided to not turn a blind eye to another troll and so, gave Liam a piece of her mind using the humour she's known for.

You no what Liam you’ve really hurt my feelings, I’m gunna cry about this tomorrow in my swimming pool. I might even run out of tissues and have to start using all of my money to wipe the tears, but don’t worry I’ll still have a sum in my account you won’t ever see in a lifetime.

Actually when I get bored of using the money I think I’ll jump in my Bentley and let down the roof down and just let the wind dry my eyes. And then after that ill stroll back onto my drive and look up at my mansion and think of only Liam liked me ? 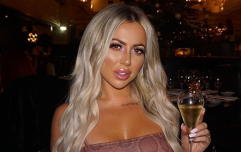 END_OF_DOCUMENT_TOKEN_TO_BE_REPLACED

The tweets from Charlotte continue as she tells Liam to "calm down" and get a "nice cuppa". Liam has since put his profile on private and so, his responses are unavailable.

Many of Charlotte's fans joined in to praise the star for standing up to keyboard warriors who sex-shame her.

Doing it for the ladies dawn! Won’t have no male try and put me down for something they brag like kings about doing every weekend. Bore off. Threatened by a women who seeks no approval or praise from any man.

Finishing the active night on Twitter, Charlotte explained that she feels "genuine pity" for people who go so low to tear her apart.

Is it normal to feel genuine Pitty for people who go so low to tear you apart on social media? Because I do I genuinely feel no other emotion but pure pitty. Poor poor souls.#PrayForTheTrolls