Chloe Ferry has undergone quite a physical transformation since starting Geordie Shore in 2015.

The star who has openly spoken about cosmetic surgery has had numerous lip fillers, cheek fillers, botox, veneers and reported bum and boob implants.

The 23-year-old is forever in the firing line for trolls who daily call her out over her appearance but, her latest look is one that's seeing abuse for the star triple.

Taking to Instagram to debut her new dramatic look, Chloe has dyed her hair black and added extensions.

Not sold by her look, outraged fans accused the star of "blackface" with another asking if she was even the same person.

"Can't watch this anymore, used to be fire, way tòo much work. Time to unfollow!"

"I'd rather live a poor happy life than this fake plastic life. Honestly get a grip!"

"Christ Chloe, is this you/ what colour are you?"

As thousands of comments continue over four new images of her brunette look.

Chloe, who chooses to ignore the trolls for her own sanity is well aware of the negativity in her comments, sharing one message from a fan asking people why they felt the need to "hammer an innocent girl on social media?" 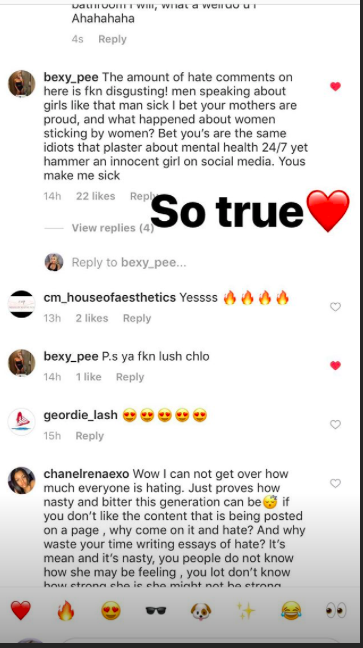 Chloe took a screen grab of the message sharing it to her story writing "so true!"

Last night, Chloe and the gang were back on our screens as Geordie Shore returned for another series with some brand new faces - you can catch up here.

popular
Ben Foden explains why he called Rachel Stevens "sexiest woman alive"
A documentary about two Irish boys who skipped school to go to New York is coming soon
And Just Like That... episode 8: Nobody saw this one coming
Here are all the Instagram accounts of the stars of Netflix's Cheer
Deirdre Morley issues medical negligence action against HSE and hospital
People are only realising Kendall Jenner and Gigi Hadid are related and the reactions are gas
These are the top baby names for 2022
You may also like
1 month ago
Hilaria Baldwin says Alec "shushed" her when she was in labour
1 month ago
Louise Redknapp's mother thought she and Jamie would get back together
1 month ago
The Handmaid's Tale's Yvonne Strahovski welcomes second child
1 month ago
Alyssa Scott shares tribute to her and Nick Cannon's late son Zen
1 month ago
Call The Midwife's Helen George shares name of "second little bird"
1 month ago
Alec Baldwin says he "didn't pull the trigger" in first interview since Halyna Hutchins' death
Next Page