The next generation of The Avengers?

Chris Hemsworth is ready to pass on the superhero torch to his kids.

The actor and his wife Elsa Pataky are parents to 3-year-old twin boys, Sasha and Tristan, as well as 5-year-old India Rose. 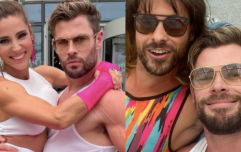 END_OF_DOCUMENT_TOKEN_TO_BE_REPLACED

But it looks like his kids are already ready to follow in his superhero-sized footsteps - and it's too cute.

The Thor: Ragnarok star shared a behind the scenes photo of him and one of his three kids on the set of his just-released Marvel film.

The Aussie actor is dressed up in full Thor costume, while his little one wears a stars-and-stripes cape.

He captioned the sweet picture:

“The passing of the torch."

The dad-of-three previously joked about how his kids were "wildly unimpressed" with his career when he brought him on set.

He told E! News in October:

“They were like, ‘This is so boring. We thought you fought monsters for a living and you don’t."

The actor is currently shooting Avengers: Infinity War with his other superhero pals.

“We’re shooting [the next] Avengers [movie] at the moment, and we did a scene the other day with Robert Downey Jr., Jeremy Renner, Chris Evans, Mark Ruffalo — and all of us were sitting there, going, ‘Who knows if we’re ever going to get a chance to do this again, and what a ride it’s been.'

“Hopefully that’s a friendship that will carry for a long, long time. I’m very lucky.”

popular
Baby found unattended in pram in Dublin, Gardaí reveal
Joanna Cooper heartbroken after her mum is diagnosed with dementia
Love Island first look: The Hideaway is open tonight as Ron has something to tell Lana
Toddler tragically dies in Wicklow following choking accident
Gwen Stefani reportedly pregnant with baby number four
Conor Mcgregor hit by car ‘at full speed’ while cycling
No plans to abolish homework, says Minister Foley
You may also like
2 years ago
Chris Hemsworth chats taking on role of wrestler Hulk Hogan for Netflix biopic
2 years ago
Netflix have released the action-packed trailer for their new movie Extraction
4 years ago
Chris Hemsworth dancing to Miley Cyrus with his kids is what we needed to see today
4 years ago
Chris Hemsworth’s wife got a Thor tattoo 20 years before she met him and it's gas
4 years ago
The trailer for a Crocodile Dundee sequel that had EVERYONE fooled
2 days ago
Barry Keoghan dedicates Oscar nomination to his baby son
Next Page