You couldn't make it up.

Chris Hemsworth’s wife, Elsa Pataky, has revealed that she got a tattoo representing the Norse God Thor when she was a teenager, years before she ever met her future husband who plays the superhero of the same name.

The 41-year-old actor and model made the revelation during an interview with Vogue Australia, in which she showed off the tattoo - a symbol inspired by the Norse God.

She told the magazine:

"Yes, it’s about Thor and I ended up marrying who plays Thor!

"It is shocking how things in life [turn out]. I just liked that [symbol] and the legend he had was so beautiful and I wanted to keep it." 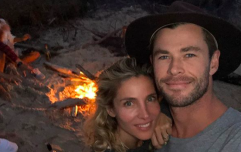 END_OF_DOCUMENT_TOKEN_TO_BE_REPLACED

Chris and Elsa married in Christmas 2010, over two decades after she got inked.

They have three children together – a five-year-old daughter called India Rose and twin sons Sasha and Tristan, four.

Her other tattoos include the letter ‘C’ on her wedding finger - which was inked on by her husband. She also has symbols for each of her family member’s initials on her forearm.