She gushed about her new partner on the season 5 reunion.

Chrishell Stause has confirmed that she is a new relationship with Australian rapper G Flip.

The Selling Sunset star shared that she is dating the musician, who is non-binary, during the season 5 reunion show.

END_OF_DOCUMENT_TOKEN_TO_BE_REPLACED

She told host Tan France that she met her new partner before appearing in their new music video.

The star broker went on: "I’ve been spending a lot of time with someone who is very important to me, they’re called G Flip, they’re non-binary so they go by they/them.

"They’re an extremely talented musician and it all started because I was going to be in their video."

She then explained that she still wants to have children, and said that she is interested in adoption.

Her ex-boyfriend Jason supported Chrishell as she gushed about G Flip. 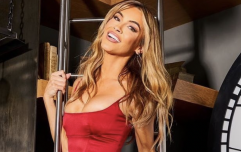 Chrishell Stause addresses "confusion" around her relationship with G Flip

END_OF_DOCUMENT_TOKEN_TO_BE_REPLACED

He told her: "They seem like a bad ass for one and seeing the smile that’s been on your face the last couple of minutes makes me very happy."

Jason then said that he was "proud" of Chrishell.

The pair dated for several months last year, but they called it quits when it emerged that they had different ideas about having children. They have since remained on good terms.

In a statement given before Christmas, Chrishell said: "Jason was and is my best friend, and other than our ideas for family ultimately not being aligned, the amount of respect and love we have for each other will not change going forward."