Chrissy Teigen is apparently as Irish as they come.

The American model is known for her hilarious posts on social media, detailing the often unheard of things that make a post-baby body.

Chrissy is a strong, independent, smart and hilarious women whos's known for not holding her tongue, especially in Twitter spats and while making television appearances.

I don't have the energy to be mad at everything all the time, okay guys? I'll leave that to you 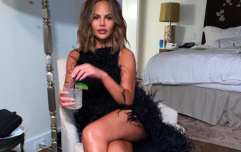 "He will always be Jack to us:" Chrissy Teigen reveals tattoo in honour of baby Jack

END_OF_DOCUMENT_TOKEN_TO_BE_REPLACED

While we've seen Kylie Jenner promote Cocoa Brown fake tan before, it seems she's not the only one who loves herself an Irish product or two. Earlier this week, Emily Ratajkowki was spotted milling the Guinness into her on the streets of Dublin and last night, Chrissy took to her Snapchat to praise another Irish product.

Spotted on JOE.ie, Chrissy Teigen took to the app to preach the values of butter - but not any old butter - our very own Kerrygold. She clarified it wasn't a sponsored post when she spoke of how she loves the taste of the Irish butter. 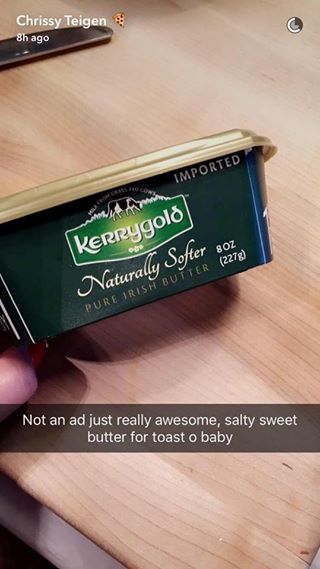 Irish Twitter users couldn't believe their eyes when they saw Kerrygold on the funny woman's Snapchat.

This isn't the first time Chrissy likes Irish foods however, as has anyone noticed she was eating what looked to be a Brunch ice-cream in her old Instagram picture?

@chrissyteigen hey chrissy! me again! are you eating a Brunch ice-cream here? pic.twitter.com/QCOtmamZYJ

Girls With Goals || Her · Ep.153: Scholarship Squad - We chat to Facebook's Claire O'Hara about our Smurfit Scholarship fund.
popular
Matthew Perry's dad was a character on Friends and how did we not notice?
Irish people urged to send a hug to loved ones on National Hugging Day in aid of Ronald McDonald House
Gwyneth Paltrow's vagina candle "explodes" in woman’s living room causing fire
Robbie Williams "fairly sick" with Covid while holidaying in Caribbean
Gilmore Girls star says he didn't storm the Capitol, praises those who did
Josepha Madigan compares issues around schools reopening to Mother and Baby Homes
Someone has ranked the penis size of men from all over the world
You may also like
3 months ago
"Every loss is personal" – what someone who has experienced pregnancy or infant loss wants you to know
8 months ago
Chrissy Teigen lost the run of herself announcing Zayn and Gigi's baby news
11 months ago
Chrissy Teigen did NOT hold back when responding to criticism of her son's outfit
1 year ago
Chrissy Teigen mum-shamed in latest Instagram post as she's told to 'cover up' in front of her daughter
1 year ago
John Legend says Chrissy Teigen's postpartum depression 'deepened' their relationship
1 year ago
John Legend has been named Sexiest Man Alive and Chrissy's tweets are GOLDEN
Next Page