This company used Brangelina's divorce as a cheeky ad

Since the news broke that Brad and Angelina were no more, it's hard to find someone who hasn't heard about it.

While rumours fly around about why they split up and other names get dragged into the mix, one company has found a way to use the divorce to ruthlessly sell their product. 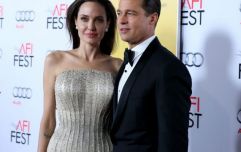 END_OF_DOCUMENT_TOKEN_TO_BE_REPLACED

Norwegian Airlines have created an ad campaign enticing flyers with the news that Brad Pitt is newly single.

Los Angeles flights are only £169 one way and the prospect on a single actor is also a plus.

There are ads online:

And less subtle ads in print:

The ad has been widely shared on social media and has been labelled as genius.

To be fair it is pretty funny.

popular
Paige Thorne breaks her silence on Jacques O'Neill drama
Ekin-Su Cülcüloğlu signs the biggest fashion deal in Love Island history
Love Island producers respond to claims Jacques was kicked off the show for "bullying"
Top tips for keeping your fake tan on for longer as the weather heats up
Met Éireann extends high temperature warning for Ireland this weekend
Tasha Ghouri lands major brand deal post Love Island
Love Island's Amber opens up on unaired fight between Remi and Jacques
You may also like
1 year ago
Real life Ross and Rachel? The craziest celeb dating rumours we've ever heard
2 years ago
Brad Pitt made a joke about Harry and Meghan last night in front of Prince William
2 years ago
Is a Brad and Jen Valentine's reunion what we REALLY want to see?
2 years ago
Brad Pitt's response to the drama over his reunion with Jennifer Aniston is interesting, to say the least
2 years ago
Jennifer Aniston 'happy to have Brad Pitt back in her life as a friend'
2 years ago
Angelina Jolie 'doesn't care' about Brad and Jen's reunion - and unfortunately, she's the only one
Next Page