Ed Sheeran has popped the question to his girlfriend, Cherry Seaborn.

The singer confirmed the news on social media on Saturday afternoon with a sweet Polaroid snap of the pair.

He revealed that the couple had actually gotten engaged last year, but decided to keep it to themselves for awhile - and their cats are "chuffed" over the news.

"Got myself a fiancé just before new year. We are very happy and in love, and our cats are chuffed as well xx"

END_OF_DOCUMENT_TOKEN_TO_BE_REPLACED

The singer was quickly flooded with well wishes from fans, with more than 11,000 people commenting on the post in the first 10 minutes.

Many of the commenters were requesting invites to the wedding (and, to be honest, we wouldn't mind one either, Ed.)

The notoriously private couple were childhood sweethearts, but are believed to have rekindled their relationship in 2015. 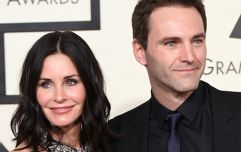 END_OF_DOCUMENT_TOKEN_TO_BE_REPLACED

The attended Thomas Mills High School in Framlingham, Suffolk together when they were younger.

And while Cherry moved to North Carolina to go to Duke University, she relocated back to the UK in December 2016 to be with the singer.

It comes as the Shape of You singer is set to play a number of shows in Galway, Belfast, Cork and Dublin later this year.

Sheeran will begin a series of dates with two shows in Cork's Páirc Uí Chaoimhon 4 and 5 May 2018.

He will then move on to Belfast on 9 May with a show at the Boucher Playing Fields.

Pearse Stadium in Galway will play host to two shows on 12 and 13 May, before Sheeran returns to Dublin for two massive dates at the Phoenix Park on 16 and 18 May.