But it wouldn't be an Eminem album without some controversial lyrics, would it?

While we were sleeping overnight, rap superstar Eminem dropped a surprise album titled Music to be Murdered by.

The 47-year-old may not have the same popularity he once did, but he is still undeniably one of the biggest names in music. 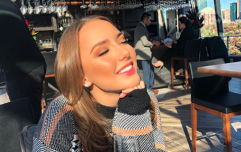 END_OF_DOCUMENT_TOKEN_TO_BE_REPLACED

And as fans make their way through the 20-track album, they will notice that the Detroit rapper is still not shying away from controversy.

One line that is getting particular attention on social media seems to reference the Manchester terror attacks that took place at an Ariana Grande concert in 2017. 23 people people were killed during the incident.

On the track 'Unaccomodating', Eminem raps: "But I’m contemplating yelling ‘Bombs away’ on the game/Like I’m outside of an Ariana Grande concert waiting."

Grande joins a lengthy list of celebrities to have been disrespected by Eminem throughout his career.

The album features some major names in the music business, including Ed Sheeran, Royce da 5'9", and Anderson .Paak.

A powerful video was also released for the new song 'Darkness', which is about gun violence in America, more specifically the 2017 Las Vegas shooting. Take a look here:

You can stream Music to be Murdered by here:

Girls With Goals || Her · Ep.154: Scholarship Squad Take 2 - Smurfit alum Grace Milton
popular
Irish designer "mindblown" as Dr Jill Biden wears dress she embroidered
Someone has ranked the penis size of men from all over the world
Dad designs bikini line for transgender teens
New Zealand set to close its borders for the entirety of 2021
Leo Varadkar says if Ireland introduced mandatory hotel quarantine, it would have to do so for a year
'They're Dead To Me Now' - Kate And Oliver Hudson Have Been Disowned By Their Father
Kylie Jenner just posted a naked snap on Instagram, and people are NOT happy
You may also like
2 years ago
Machine Gun Kelly has responded to Eminem’s new diss track 'Killshot'
2 years ago
Eminem just dropped a surprise new album, and we're so shook
2 years ago
Why are Irish fans annoyed at Eminem? Twitter is raging at the rapper
3 years ago
These are the acts rumoured to headline Coachella 2018 with Beyoncé
3 years ago
Eminem served his 'mom's spaghetti' and his fans just can't deal
3 years ago
Pink drunkenly emailed Eminem a 'love letter' and got a very blunt reply
Next Page