A huge congratulations is in order for actress Alison King - she just announced her engagement!

The Coronation Street star shared the news to OK! Magazine, with a photoshoot and interview with her fiancé. 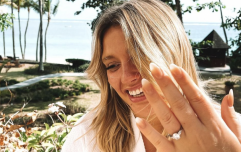 END_OF_DOCUMENT_TOKEN_TO_BE_REPLACED

Alison kept her relationship out of the limelight until now, and revealed her soon-to-be husband popped the question while on holiday with friends.

She told the magazine: "It was just a few days after our one-year anniversary. I had an inkling he was going to pop the question because he kept putting something on my finger and going, 'Right, close your eyes and forget this ever happened!'

? NEW ISSUE ALERT! ? We’re sending a huge congratulations to Alison King and David Stuckley on getting engaged! The @coronationstreet actress and her fiancé exclusively reveal their happy news in @ok_mag this week and Ali opens up about her joy at finding the love of her life. She tells us, ‘David’s my perfect man in every way.’ ?? We also visited @bbcstrictly hopeful @mikebushellofficial’s home, and as he introduces us to his wife Emily and his three daughters from a previous marriage, Mike reveals his unique proposal story and not being fazed by the Strictly ‘curse’. As Hustlers hits cinema screens, @jlo opens up about fighting female stereotypes. Plus, we catch up with @emmawillisofficial about why she’d be a terrible online dater. Meanwhile, we join Quadrophenia star Leslie Ash at her London penthouse as she reveals all about her health battle and her enduring love for husband Lee. All this out in London today and nationwide tomorrow. Don’t miss out! ??✨ . . . . . #okmagazine #alisonking #coronationstreet #jlo #jenniferlopez #emmawillis #thecircle #mikebushell #strictly #strictlycomedancing #leslieash #celebritynews #celebrity #celeb #okmag #okmagazine

"We’d also discussed marriage, too. I think we both went from 'No, we don’t ever need to get married', to 'Oh, we really want to get married!'"

David continued that he had it all planned - but it didn't really work out. He wanted to go on a cruise, but the weather took a turn and they had to make alternative arrangements.

"The crew were all in on the surprise, so they said: ‘We’re not going to cancel, don’t worry!’

"We got out of the marina and the waves were huge! I wouldn’t have dared to hold the ring in case it flew out of my hands. So I asked them to turn us around and they took us into the marina, where there were no people around."

Alison, who plays Carla Connor on the soap, began dating David in 2018 after they were introduced to each other by her personal trainer.