Curtis Pritchard addresses the rumours that he cheated on Maura Higgins

Over the weekend, a video emerged of what appeared to be Curtis Pritchard "getting close" to a woman that is not Maura Higgins.

The video, which was obtained by The Sun on Sunday, is from New Year's Eve and shows a man - who looks like Curtis - leaning down and apparently kissing another woman.

It was reportedly filmed in O’Neill’s bar in High Wycombe, Bucks, after Curtis made an appearance in Dick Whittington at the Wycombe Swan theatre.

Of course, outrage broke out online however, now Curtis has addressed the rumours, saying that they are completely false.

The star, who is acting as receptionist on The Greatest Dancer, appeared on Lorraine today and said it's all "nonsense." 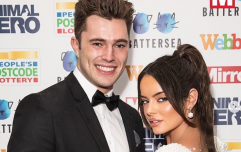 END_OF_DOCUMENT_TOKEN_TO_BE_REPLACED

"New year photos [are] nonsense – you can’t hug somebody or talk to somebody in this day and age without something coming out.

"Me and Maura are completely fine. I was there watching her on Dancing on Ice yesterday. I have found love," he admitted.

The pair have previously said that they don't see each other as often as they would like, but will always support one another.


popular
The Duchess of Cornwall had an interesting reaction when asked if she would miss Harry & Meghan
Celebrities have nothing but praise for Jennifer Aniston's 'morning after' post
Penneys has launched a new Baby Yoda collection - and not going to lie, we want it
These blue mom jeans from Penneys are actually unreal, and they're only €17
Coronation Street has confirmed a heartbreaking storyline for Maria Connor
Kate Middleton is wearing an amazing red glittery gown tonight and she looks like a princess
The flattering €16 Penneys dress we'll be wearing every day for the foreseeable future
You may also like
1 week ago
Maura opens up about Curtis getting jealous of her Dancing On Ice partner
2 weeks ago
Maura Higgins in legal row over name of reality show, Maura the Explorer
1 month ago
Maura Higgins was the cutest child EVER as you'll see in Curtis Pritchard's soppy birthday post
2 months ago
'Maura who?' Maura Higgins slams Louis Walsh for saying he doesn't know her
2 months ago
Curtis Pritchard is head over heels for Maura Higgins, as you can see from his latest WhatsApp
2 months ago
Maura Higgins' mam is getting her own agony aunt show because of course she is
Next Page