The Daly Dish's Gina Daly is showing off her newborn for the world, introducing her son Gene on her Instagram for the first time.

After announcing his arrival on November 29th, so far we had only gotten glimpses of his tiny feet and legs, but now it's time for his adorable face to be introduced to the world. 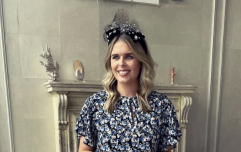 END_OF_DOCUMENT_TOKEN_TO_BE_REPLACED

Gina wrote, alongside pictures of her new son: "I want to properly introduce you all to our amazing, beautiful little boy Gene Daly. We have been in such a wonderful little bubble since his arrival almost a week ago, he has stolen our hearts."

Gina went on to reveal that Gene was born with Down Syndrome, saying there is only more of him to love.

END_OF_DOCUMENT_TOKEN_TO_BE_REPLACED

She continued: "Gene was born with Down Syndrome which means he has an extra chromosome of awesomeness .. we are blessed to be his mammy and daddy and this little man will be shown all the love in the world."

"Our baby boy arrived safe and well and has stolen our hearts. We are not ready to share him with the world just yet, we are still very much captured in the joy and magic of this little baby bubble, he is the most beautiful little boy in the world xx"

Gina and her husband Karol, the couple behind The Daly Dish, are already parents to Holly, aged 13 and Ben, who is 10.

The couple announced they were expecting their third child together back in June of this year, with a sweet picture of Holly and Ben holding up a baby t-shirt which read "little bro", announcing they were also having a baby boy.

popular
Vogue Williams slams man who refused to swap seats with her on plane
Christine Quinn won't be returning to Selling Sunset
This is why the world is obsessing over Adidas Gazelles
Are we getting a mini heatwave in September?
Phoebe Bridgers and Paul Mescal go sale agreed on West Cork home
10 must-have summer essentials that are perfect for your next sun holiday
Crown Paints advert receives 200 complaints over 'misogyny' and 'everyday sexism'
You may also like
2 months ago
Toddler drowns in swimming pool while on holidays in Costa Blanca
3 months ago
Kylie Jenner gives first glimpse of new son in Met Gala vlog
3 months ago
Irish influencer Claudine Kehoe welcomes her first child
4 months ago
Kylie Jenner felt "rushed" and still hasn't settled on son's name
4 months ago
Glee actor Darren Criss welcomes first child with wife Mia
4 months ago
Cardi B shares first pictures of her seven month old son and finally tells us his name
Next Page