Danny O'Donoghue is dating a Brazilian Sports Illustrated model and fair play, like

Danny O'Donoghue: you might assume he isn't all that famous and then you think about and realise that actually he really is.

Dan was raised in Ballinteer in Dublin. At the age of 20 he went to LA to write songs for the likes of Britney Spears and TLC. Then he founded The Script - a band that has sold millions of records and has notched up No1 singles in the UK and Ireland as well as a Top 5 album in the US. 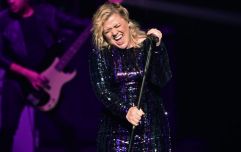 END_OF_DOCUMENT_TOKEN_TO_BE_REPLACED

He furthermore appeared as a judge on The Voice UK - alongside Will.I.Am and Tom Jones.

So far so famous. Still, we nevertheless had a 'fair play to ya, boyo' moment earlier today when we noted that Danny is currently dating a Brazilian Sports Illustrated model.

Anne De Paula is 22 and seems to have an incredibly successful modelling career. That and she hopes to eventually pursue a career in medicine (her parents are both doctors).

She previously told GQ Portugal: "I love my work but I want to do other things besides being a model. I want to finish my studies and get my degree in medicine. It’s another dream I have.

"My parents work in that area and they are my role models."

It is believed Anne first met Danny when she starred in The Script’s video for the single No Good In Goodbye almost four years ago.

She's well-used to hanging out in his native Dublin too. Last year, Danny told 2fm: "She has loads of mates here, there’s a big Brazilian community here in college and working.

"I never even realised that. It’s probably one of the biggest destinations for Brazilians because the people are lovely."

Girls With Goals || Her · Ep.160: The Beauty Of Coaching - Hayley Harrison joins us from Sport Ireland
popular
Starbucks has a bubblegum-flavoured frappuccino on their menu – but you need to hurry
Why Prince Harry and William aren't walking together at Prince Philip's funeral
Kate Middleton has addressed the rumours that she's pregnant with her fourth child
TV host makes baffling remark about Meghan Markle's 'reaction' to royal family photo
M&S just launched the designer collaboration of dreams – with the ONE dress everyone needs
Here's what happens on every day of your menstrual cycle (roughly)
Prince Philip 'advised Prince Harry not to marry Meghan' for a brutal reason
You may also like
2 years ago
Ronan Keating's daughter unfortunately receives no turns on The Voice
2 years ago
Niall Horan shares his one piece of advice for aspiring singers
2 years ago
Songbird of our generation? The Voice UK is holding auditions in Dublin this month
3 years ago
Jennifer Hudson was shocked by what Olly Murs did on The Voice last night
3 years ago
Olly Murs has 'annoyed' Simon Cowell by joining rival show
1 week ago
Laura Whitmore urges fans to "stop comparing bodies" of new mums
Next Page