The world was stunned into silence when legend David Bowie died last month, so it seemed fitting that this week’s Grammys would pay tribute to the star.

It seems not everyone was quite as moved with the singer’s performance, with David Bowie’s son tweeting a dig at the singer following the awards show.

Taking to his Twitter account, Duncan Jones posted the cryptic message, using a definition of the word ‘Gaga’… and the comparison wasn’t complimentary: 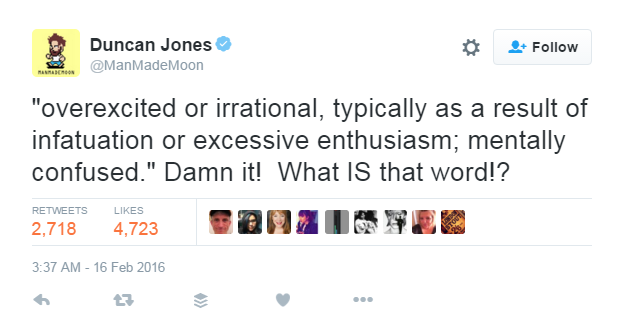 Personally, we thought she did a great job on the night. Don’t take our word for it though, you can catch the full performance here:

popular
Primark reintroduces female-only fitting rooms after two men walk in on woman
Anna Delvey is set to be released from prison
Davide Sanclimenti opens up on having kids with Ekin-Su Cülcüloğlu as he turns down Dancing On Ice
Hilary Swank, 48, reveals she is pregnant, expecting twins
People are being warned not to dress as Jeffrey Dahmer for Halloween
I’m A Celebrity bosses ‘sign first Love Island contestant for 2022 series’
Woman tells Kate Middleton 'Ireland belongs to the Irish' during Belfast visit
You may also like
3 weeks ago
Employment lawyer warns against using BeReal at work
4 months ago
Gogglebox star Mary criticised over Boris Johnson comments
6 months ago
Facebook and Instagram down amid social media outages
6 months ago
David Beckham hands over his 71 million followers to Ukrainian doctor
8 months ago
Government to consider new bill around issue of harmful online content
9 months ago
Woman tests positive for Covid mid-flight, isolates for 5 hours in bathroom
Next Page