Debby Ryan got married and her dress was absolutely stunning

Debby Ryan got married and her dress was absolutely stunning.

The actress - who was started in Gossip Girl, Horse Girl and Insatiable - and Twenty One Pilots' Joshua Dun tied the knot late last year.

However, the couple and their close friends kept the wedding a secret. However, eagle-eyed fans began to wonder if Dun and Ryan had some news to share, after spotting him wearing a wedding ring in Twenty One Pilots' music video for Level of Concern last month.

Ryan explained to Vogue that they had planned their wedding - which took place on New Year's Eve - in just 28 days.

“We began to flirt with the idea of having a destination party celebrating the new decade, then decided in December to get married [in Austin] on New Year’s Eve, and just keep dancing until after the ball dropped,” she said, adding that the "time just felt right."

She told the publication how the passing of a close friend the previous summer had changed her outlook.

“He was excited that Joshua and I were getting married, and I never doubted that I’d know him through every coming phase of our lives. When he passed, it really rocked me and put a lot of things in perspective," she added. 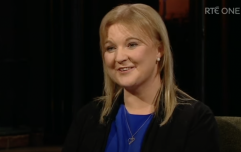 END_OF_DOCUMENT_TOKEN_TO_BE_REPLACED

"It didn’t feel important to wait anymore, to stop being busy, or for things to line up perfectly—intending to do things is not nearly as powerful as doing, as we aren’t promised tomorrow.”

Dun wore an emerald velvet suit from Paul Smith for the wedding, while Ryan wore a classic princess-style gown from Elie Saab.

"The day the collection dropped on Vogue, I saved it,” she explained. “For a long time, it was the only image of a wedding dress I had saved anywhere, and the only image in a folder titled ‘wedding’ on my phone.”

popular
A clip has resurfaced of Machine Gun Kelly discussing a teenage Kendall Jenner
People are only realising Kendall Jenner and Gigi Hadid are related and the reactions are gas
Worried about a loved one? Here are 5 signs of suicide to look out for
Seems sudden? This is why the restrictions have completely lifted this soon
FBI reveal that Brian Laundrie is responsible for Gabby Petito's death as they discover notebook
These are the top baby names for 2022
A documentary about two Irish boys who skipped school to go to New York is coming soon
You may also like
3 days ago
Angela Scanlon's first book set to be released in May
3 days ago
Tributes pour in for Vogue icon Andre Leon Talley, who has passed away
4 days ago
Euphoria fans delighted after learning Fezco's Irish connection
4 days ago
Love Island's Faye reveals thieves broke into Teddy's car and stole belongings
4 days ago
Full House's Jodie Sweetin announces she's engaged a week after Bob Saget's death
4 days ago
"Welcome home": Stacey Solomon rescues adorable new dog
Next Page