There's an arsenal of frankly weird phrases that certain sections of the media employ to describe female bodies.

The language is a throwback that sticks on the tongue when read aloud now but bizarrely, it still exists.

US website Inquisitr ran a story under the headline 'Demi Lovato Appears To Have A Fuller Figure After working Up A Sweat In LA' today. 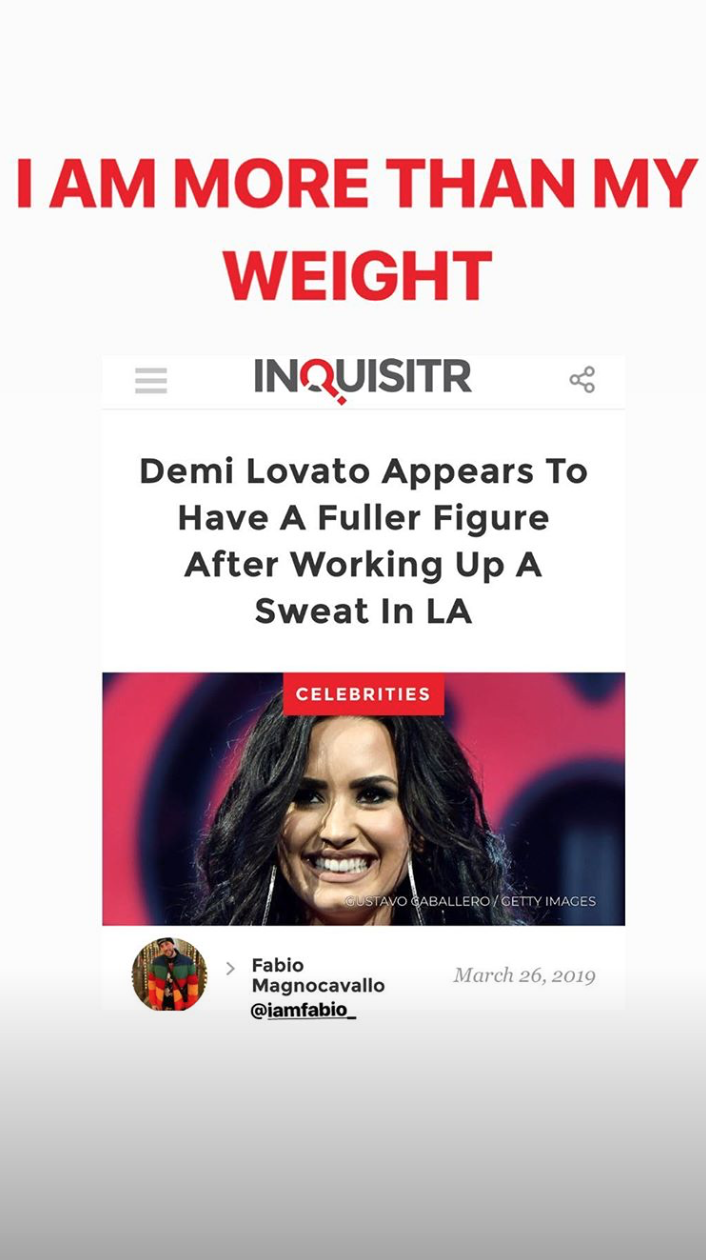 Demi, who has publicly battled an eating disorder and other mental health issues, was having none of it.

She took to Instagram and calmly and articulately went in on the publisher for appearing to shame her over the way she looked.

"Unlike the past, I'm not triggered, I'm not upset that someone wrote a headline about my 'fuller figure'," she wrote on her Instagram story.

"Especially a woman who has been so open about being in recovery from an eating disorder.

"I'm not upset for myself but for anyone easily influenced by the diet culture."

Too many people, she continued, base their body ideals on what others tell them is acceptable.

"Articles like these only contribute to that toxic way of thinking.

"If you're reading this: Don't listen to negative diet culture talk.

"You are more than a number on a scale and I am more than a headline about my body shape."

Happily (kind of) there was a kind of resolution to the story - the writer got in touch with Demi on Instagram to apologise.

"This is a lesson learnt," he told her.

She thanked him for saying sorry, implored her fans to respond to hate with love and promptly carried on with her day.

popular
Claire Byrne Live viewers in shock as woman shares family DNA secret
An ode to Derry Girls
Gogglebox fans show an outpour of support for star after hospital picture
WATCH: We finally have a trailer for Jennifer Lopez's Netflix documentary
Sex educator Jenny Keane is back to answer more of your sex and pleasure questions
Man behind Marilyn Monroe dress says letting Kim Kardashian wear it was a "big mistake"
Teenager dies in sand collapse after digging hole on beach
You may also like
3 months ago
Opinion: We need to think before commenting on other people's bodies, even if it's positive
7 months ago
Adele said that her anxiety caused her to lose weight
9 months ago
Why ‘skinny shaming’ can be damaging too
9 months ago
Let's get rid of the stigma around body hair - it's just hair
10 months ago
Opinion: Selena's swimwear photoshoot needs to open the conversation more
11 months ago
Opinion: Kate Winslet's attitude towards her body is exactly what we need more of in media
Next Page