Did Kim Kardashian just reveal the name of her fourth child?!

Did Kim Kardashian just reveal the name of her fourth child?!

People are convinced that Kim Kardashian subtly shared the name of her fourth child and it couldn't be cuter.

The proud mum has been busy sharing photos from her baby shower and many fans think the Instagram caption includes a rather major clue as to her little one's name. 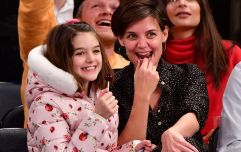 END_OF_DOCUMENT_TOKEN_TO_BE_REPLACED

As you'll see below, the reality TV star included a teddy bear emoji leading people to believe that the little boy is named Bear.

Kim also took to Twitter to share the images and used a teddy bear emoji again and people went crazy asking if the little boy was called Bear.

Aside from Bear, Teddy/Theodore has also been suggested and while they could be clutching at straws, we could definitely see Kim and Kanye choosing this adorable moniker.

His name has to be bear right ??

If Bear West is, in fact, the baby's name, he's not the only celebrity baby named Bear for this was what Cheryl Cole and Liam Payne chose to name their little boy.

The Keeping Up With The Kardashians star announced on Friday that she and her husband, Kanye West, had welcomed their fourth child.

We celebrated our baby boy about a week ago and now he’s here! He’s so perfect! Here are some pics of my CBD baby shower. I was freaking out for nothing because he is the most calm and chill of all of my babies so far and everyone loves him so much ?

Kim took to Twitter to confirm the arrival of their "perfect" boy, who was born via surrogate.

The proud mum did tell her fans a little bit about the little boy. Namely, that he's "Chicago's twin."

"I’m sure he will change a lot but now he looks just like her," she added.

Girls With Goals || Her · Ep.160: The Beauty Of Coaching - Hayley Harrison joins us from Sport Ireland
popular
28 amazing Irish glamping spots for your 2021 staycation
Doctors warning young people against 'sun cream contouring' TikTok trend
Louise Redknapp just admitted a shocking truth about her ex husband, Jamie Redknapp
Easy DIY: A super-chic pallet daybed for garden entertaining
The countdown is on! 10 things we'll be racing to Penneys for when they open
Someone has ranked the penis size of men from all over the world
Hailey Bieber addresses pregnancy rumours after Thanksgiving photo sent fans wild
You may also like
1 month ago
Woman goes viral on TikTok after posting picture of wine glass without noticing reflection
1 month ago
Instagram bans adults from messaging users who are under 18
6 months ago
3 things I've done to make my Instagram feed better for my head
7 months ago
Sir David Attenborough has officially joined Instagram and we couldn't be happier
11 months ago
Dogs Working From Home is the Instagram account that you need to follow during lockdown
11 months ago
'I'm not posting continuous pictures of my face' Niamh Webb O'Rourke on the evolution of blogging
Next Page