Bennett received backlash from Imogen Thomas over his tribute to his ex-girlfriend.

Big Brother star Pete Bennett has defended his decision to share the last message he received from Nikki Grahame before she passed away.

Pete took to Instagram to highlight that his tribute to his former girlfriend was "from the heart", after Imogen Thomas, a former Big Brother contestant, accused him of "cashing in at every opportunity". 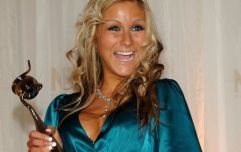 END_OF_DOCUMENT_TOKEN_TO_BE_REPLACED

In an Instagram story, the Welsh model hit out at Bennett and called his decision to share his last text from Nikki the "ultimate betrayal".

She added that he put up a photo of Nikki "against everyone's wishes."

In response, Pete defended his decision to pay tribute to Nikki, and added that he had permission from Nikki to share the photo.

"In such a sad time of grief I've just had to witness Imogen Thomas trying to publicly shame me on her Instagram," Pete wrote.

"About selling the final text, I didn't sell anything, my tribute to Nikki in heat mag was from the heart and for no money and I sent love to Nikki's family and friends in it too.

"Contrary to what Imogen is saying, Nikki gave me permission to upload the final picture of us saying it was a 'lovely picture'. I put a link underneath the picture of the fundraiser to raise some funds for her care so she could get better whilst Imogen was promoting McCain oven chips and sending me daggers."

He went on to say that the only negativity he's received has been from Imogen, who has "continued to troll" him ever since.

"Meanwhile everybody else has been supportive to me," he wrote.

Bennett added that while he might not have seen Nikki as much as he used to, he was always in contact with her. When he found out she was ill, he "did everything he could" to be there for her.

Nikki Grahame passed away on 8 April after living with anorexia for many years.

If you or someone you know is struggling with an eating disorder, there is help available. You can call The Eating Disorders Association of Ireland's helpline on 01-2107906.

Girls With Goals || Her · Ep.161: Feeling Peachy - Sharon Keegan of Peachylean on being an absolute BOSS!
popular
The morning wellness routine I started last year that I now can't live without
The fashion world is OBSESSED with potato brown right now – and for good reason
QUIZ: Can you beat Ross's quiz in Friends?
More footage of Tristan Thompson cheating on Khloe has emerged
Someone has ranked the penis size of men from all over the world
Kate Middleton has addressed the rumours that she's pregnant with her fourth child
The perfect-all-summer €17 dress to keep your eyes peeled for in Penneys on Monday
You may also like
1 month ago
"I thought we could save her" Pete Bennett shares emotional tribute to Nikki Grahame
1 month ago
Big Brother star Nikki Grahame, 38, dies following anorexia battle
3 years ago
Ever wondered what happened to Nikki Grahame?
1 week ago
Amy Adams and Patrick Dempsey land in Ireland for Enchanted sequel
1 week ago
Tristan Thompson threatens legal action over new cheating claims
1 week ago
Meghan Markle is releasing a children's book inspired by Harry and Archie
Next Page