Donal Skehan has shared an adorable photo of his newborn son - and announced the little one's name.

The chef took to social media last weekend to reveal he and Sofie had welcomed their second child together - another baby boy - after a "whirlwind" 36 hours.

And in the early hours of Friday morning, the 33-year-old shared the another photo of the newborn - whom he says he and Sofie have been "smitten" with sine he arrived last week.

"Hello baby Oliver! This time last week little Ollie arrived into our world and we’ve been smitten ever since," he began the caption.

"Taking time to soak it all in and enjoying every minute! Settling in to life as parents of two has had plenty of ups and downs but wrapping up week one with a smile," he continued. "Oliver Kai Skehan, I hope you’re ready for the fun! Thanks for all the sweet messages."

"Welcome to the world little guy," the caption to the post began. "What a whirlwind the last 36 hours have been- @SofieSkehan and baby boy doing great, give or take a little lost sleep! He’s a bouncing little bruiser weighing at 9lbs and looks just like his big brother." 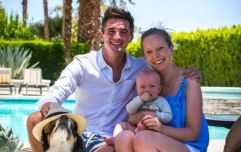 Sofie and Donal Skehan have welcomed their second child together

END_OF_DOCUMENT_TOKEN_TO_BE_REPLACED

He went on to thank all the "brilliant nurses and our doctor" for dropping their Thanksgiving plans to "bring this little dude into our lives."

"All exhausted here but grateful to be back home safe and sound with our new little addition," he ended the caption.

Fans rushed to congratulate the pair on their happy news.

popular
Two women survive 15 hours in the water in Galway Bay
This no bake 'Chocolate Refrigerator Cake' recipe has us drooling
Irish influencer Lisa Jordan reveals her little boy's name and it's so cute
Want a snatched nose? These contouring hacks are making waves online and they're pretty simple!
7 skin care wonders: beauty products I just can't live without in my 30s
Green hair and ripped bikini lines! We have only ourselves to blame for these lockdown beauty disasters
This 'Mississippi Mud Pie' recipe is a must-try for chocolate cake fans
You may also like
7 months ago
Healthy eating has never looked as good as Donal Skehan's harissa chicken with rainbow salad recipe
7 months ago
Put your holiday downtime to good use and cook up some of Donal Skehan's jewelled herb and rice salad
7 months ago
Ease your way into healthier eating with Donal Skehan's 'all the greens' pasta recipe
11 months ago
Donal Skehan is launching a new food brand and it looks delicious
1 year ago
Great news! Donal Skehan and his wife, Sofie, are expecting their second child
2 years ago
Donal Skehan reveals his plans to bring baby Noah back to Ireland
Next Page