A sentencing date has been set for 12 July.

The actor, who is known for his performance on the teen series Drake & Josh, was arrested in Cleveland earlier this month. According to court documents obtained by PEOPLE, Bell  was charged with child endangerment over an incident that took place in 2017. 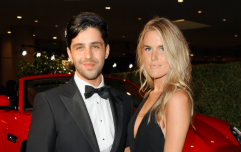 Drake and Josh's Josh Peck and his wife, Paige, have welcomed their first child

END_OF_DOCUMENT_TOKEN_TO_BE_REPLACED

He initially entered a not guilty plea, but subsequently said that he was guilty as he agreed to a plea deal.

KXAN, an NBC affiliate, reported that the alleged incident involved Bell engaging in an inappropriate chat with a 15 year-old girl.

At the hearing yesterday, a judge told Bell that the charge of attempted endangering children carries a sentence of anywhere from six to 18 months in prison, and/or a fine of up to $5,000 (€4,192). The judge stipulated, however, that prison time is not mandatory.

A second charge against Bell - disseminating matter harmful to juveniles - carries a six month jail term, and/or a fine of $1,000.

The judge also told the actor that if he does go to prison, he could be "subjected to a discretionary period of three years post-release control", which could "involve restrictions" on his activities.

A sentencing date has been set for 12 July. During this, the victim will have the option of reading a victim-impact statement.

In a statement issued to PEOPLE, Bell's lawyer, Ian Friedman, said: "All questions about this case will be answered at sentencing, including why Mr Bell chose to enter his plea."

popular
My hair has never been this thick and healthy – and here is what I have been doing differently
The sad reason why viral gymnast, Katelyn Ohashi, isn't on the USA Olympic team
WATCH: WAP sign language interpreter steals the show at festival
Here's what happens on every day of your menstrual cycle (roughly)
The First Quadrillionaire? Paypal Accidentally Gives Man $92 Quadrillion
Love Island fans can't cope over Millie still laughing at Liam's jokes
Why Are Men so Obsessed With Boobs? The Answer is Pretty Surprising...
You may also like
2 years ago
Hug me brotha! A Drake and Josh revival is officially in the works
3 years ago
'I'm finally home!': Josh Peck's hilarious visit to the Drake & Josh house
3 years ago
Drake and Josh made up at the VMAs and it was lovely
4 years ago
Miranda Cosgrove refuses to take a side in the Drake vs. Josh feud
4 years ago
Drake wasn't invited to Josh's wedding and 90s kids are heartbroken
1 week ago
Dolly Parton recreates her 1978 Playboy cover for husband's birthday
Next Page