Drake gets "emotional" on the latest episode of Saturday Night Live

Drake has had enough of the SNL cast disrespecting him.

Populariser of 'sadboi' culture and the internet's second favourite crying meme, Drake confirmed every prejudice against himself this weekend by publicly opening up to the world on Saturday Night Live.

He's self-aware enough to realise he does this on literally every album. The self-parody is pretty impressive. 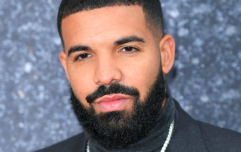 END_OF_DOCUMENT_TOKEN_TO_BE_REPLACED

Never afraid to get roasted or make fun of himself, Drizzy spits some 'deep' bars about "having no friends" and "no water" after a Saturday Night live cleaner accidentally swipes his bottle of Evian.

The SNL writers had a ton of material to work with now that Drake's new album – Views – has dropped. The lols included endless memes, and working Drake's musical talent into as many sketches as possible.

The sit proves Drake has come a long way since Degrassi High School.

He can still act though.

popular
Ashling Murphy's funeral to take place today
Una Healy "having fun" dating Garda love interest
Concerts and pub restrictions are expected to be lifted this week
Gardaí are planning to make an arrest in Ashling Murphy murder case
Fans convinced Love Island's Chloe inspired new Kanye track
16 and Pregnant star Jordan Cashmyer dies aged 26
Here's where all the 149 tickets that won €36,687 in Saturday's Lotto were sold
You may also like
1 year ago
Listening to these songs in "8D Audio" is changing the way people appreciate music
2 years ago
Rihanna and Drake post heartbreaking tributes to rapper, Nipsey Hussle
2 years ago
We have it on good authority that Drake might be heading to this venue after his Dublin gig this week
2 years ago
YES! Drake has just announced he's playing three shows in the 3Arena
3 years ago
Footage of Drake kissing an underage girl has surfaced online
3 years ago
Pizza and Drake: Tinder has a lot to say about 2018
Next Page