According to a California Highway Patrol report, Kevin Hart and the driver, Jared Black, sustained major injuries in the crash and were transported to hospital for treatment.

Dwayne Johnson has now given an update on Kevin, saying that he is doing well.

TUNE IN TOMORROW (Monday) for the premiere of the @kellyclarksonshow on @NBC! ?????? Her first guest ever was yours truly and we had a BLAST! My son @kevinhart4real was originally booked but when he was injured in a recent car accident - I did the right thing and stepped in for my family. Thank God he was buckled into his car seat ??? Heal up brotha, always got your back. Enjoy the show everyone!!

Speaking on the premiere episode of The Kelly Clarkson Show, Dwayne said: "Everything is good, I spoke with Kevin, I actually refer to him as my son. I connected with him today." 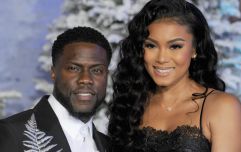 END_OF_DOCUMENT_TOKEN_TO_BE_REPLACED

"And you know what? These things happen in life and thankfully he was strapped in nicely to his car seat. That's real love."

The Rock ended his honeymoon early to come home and step in for Kevin as he was scheduled to appear on numerous talk shows.

"I love the guy, he's one of my best friends," Dwayne said. "And honestly, I mean, thank God, it could've been a lot worse. So, he's a lucky man, and he knows it too. I wish him the best and a speedy recovery and I'm gonna see him soon."


popular
Five-year-old boy dies following farming accident in Roscommon
WIN a hoodie bundle from GYM+COFFEE to keep your workouts looking fab
Disney Plus announces new titles coming in April
Apparently, a special extra episode of Tiger King is coming soon
10 summmer dresses we are ordering this week to cheer ourselves up
Are the IT GALZ up on their sexual health knowledge? We tested them to find out
Taoiseach Leo Varadkar re-registers as doctor amid Covid-19 pandemic
You may also like
5 months ago
Kevin Hart's 'appreciation for life is through the roof' following major car crash
7 months ago
Kevin Hart has suffered major injuries following a car crash in California
10 months ago
Kevin Hart and Eric Stonestreet are excited to be BACK for The Secret Life of Pets 2
1 year ago
Ellen DeGeneres is trying to convince Kevin Hart to host the Oscars in spite of what's gone on
1 year ago
Kevin Hart will no longer be hosting the Oscars due to past homophobic tweets
1 year ago
The host for the 2019 Oscars has been CONFIRMED and it's a good one!
Next Page