Fans are LOVING it.

Emily Blunt is on the cover of the December issue of American Vogue  - dressed as none other than Mary Poppins.

The Devil Wears Prada actress is taking on the iconic role in Mary Poppins Returns, which is due to hit cinemas in Ireland this December. 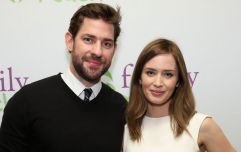 END_OF_DOCUMENT_TOKEN_TO_BE_REPLACED

The cover photo, which was photographed by Annie Leibovitz, shows Blunt in an all-red Dior ensemble: a fitted blazer and a full tulle skirt.

And, of course, an open umbrella by London Undercover and Poppins' beloved hat.

The photoshoot was accompanied by an in-depth interview, in which the actress spoke about her upcoming role as the beloved nanny.

In the interview, Blunt spoke about how she reckons Mary Poppins is "a superhero."

“You could say she’s some sort of angel. She recognizes what people need, and she gives it to them, yet they discover something about themselves in the process.

"I don’t think she concerns herself with what she is. There’s nobody else like her—which she quite likes.”

She also admitted the the did not re-watch the classic film before filming began - as she didn't want it to put her off the role.

“I knew that if I watched Julie Andrews’s version, maybe I would take the edge off of what my instincts were telling me to do.

“Also, I didn’t want to be completely intimidated by the brilliance of her voice.”

popular
Tom Parker's wife suffers more heartbreak just nine months after husband's death
Maura Higgins claims she was left by designer who went to style someone else at an award show
Fans are feeling seriously sorry for Molly Mae Hague after resurfaced interview
Father took daughter to hospital three times before she died of Strep A
He may be a politician, but Leo Varadkar's personal life is none of our business
Woman dies in Mexico after couple "cut" unborn baby from her womb and claim it's theirs
Billie Faiers reveals the name of her third child
You may also like
1 year ago
Jamie Dornan responds to Wild Mountain Thyme accent criticism
3 years ago
Emily Blunt says this is who The Devil Wears Prada's Miranda Priestly is REALLY based on
4 years ago
Emily Blunt just revealed her favourite scene from The Devil Wears Prada, and YAS
4 years ago
There was a reference to The Office in A Quiet Place and it was quite sweet
4 years ago
Emily Blunt has some brilliant news for fans of The Devil Wears Prada
4 years ago
This might just be the best horror movie of the year, according to critics
Next Page