The supermodel said she was left feeling humiliated after the alleged incident.

Emily Ratajkowski has said that she was sexually assaulted by singer Robin Thicke during the filming of the music video for Blurred Lines.

The American supermodel accused the singer of groping her bare breasts without consent on set.

END_OF_DOCUMENT_TOKEN_TO_BE_REPLACED

The allegations were first reported in The Sunday Times and the incident is documented in her upcoming book, titled My Body.

"Out of nowhere, I felt the coolness and foreignness of a stranger's hands cupping my bare breasts from behind," she said. "I instinctively moved away, looking back at Robin Thicke. He smiled a goofy grin and stumbled backward, his eyes concealed behind his sunglasses. My head turned to the darkness beyond the set."

END_OF_DOCUMENT_TOKEN_TO_BE_REPLACED

The 30-year-old goes on to say she felt humiliated afterwards but continued filming.

"I didn’t react – not really, not like I should have, I pushed my chin forward and shrugged, avoiding eye contact, feeling the heat of humiliation pump through my body.

“I didn’t have any real power as the naked girl dancing around in his music video. I was nothing more than the hired mannequin.” 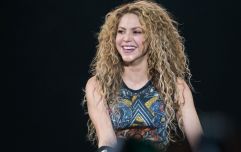 END_OF_DOCUMENT_TOKEN_TO_BE_REPLACED

"I remember the moment that he grabbed her breasts," she said. "He was standing behind her as they were both in profile. Robin sheepishly apologised. As if he knew it was wrong without understanding how it might have felt for Emily."

Emily was one of three models who appeared in the music video for the hit song, which also featured Pharrell Williams and rapper T.I.

Since its release in 2013, the song has received its fair share of criticism, due to its subject matter of non-consensual sex, and was accused of glorifying rape culture. Pharrell later admitted he was embarrassed by the lyrics.

My Body, a book of essays chronicling moments from Emily's life, is set for release on 19 October.