Looks like Debbie Dingle's going to be taking a break from the village for awhile.

Emmerdale's Charley Webb has confirmed she has officially begun her maternity leave.

The actress, who plays Debbie Dingle on the ITV soap, took to Twitter to mark the start of her break from work.

"First day of maternity leave and the suns shining. YES! I’ll be found in the garden sunbathing (for about 20 seconds before one of the kids need me)."

First day of maternity leave and the suns shining. YES! I’ll be found in the garden sunbathing (for about 20 seconds before one of the kids need me)☀️

It comes as the soon-to-be mum-of-three told OK Magazine she had been experiencing a pregnancy condition which has left her in "agony".

In an interview in June, she said:

“I still get waves of sickness but I’ve also been diagnosed with SPD [symphysis pubis dysfunction, which affects your pelvis and back].

“It’s when your muscles have relaxed too much ready for the birth. It’s agony.” 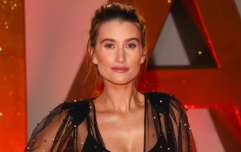 END_OF_DOCUMENT_TOKEN_TO_BE_REPLACED

Back in February this year, Charley announced she and her husband are expecting their third child together.

She shared a photo of herself, Matthew, and their two children Buster and Bowie with the caption: "Number 3."

Charley and Matthew have been married since last year.

The pair wed in a secret, surprise ceremony after beginning a relationship in 2007. Matthew, who plays David Metcalfe in the soap, and Charley told their guests that they were celebrating her 30th birthday.

When they all arrived, the pair revealed that they were actually getting married.


popular
Say hello to the €19 Penneys skirt that will go with everything in your wardrobe
Say hello to the €20 New Look skirt that will go with everything in your wardrobe
We are absolutely in love with this cute €29 teddy jacket from the Zara sale
Penneys has launched a range of Looney Tunes pyjamas, and prices start at only €8
Introducing the €45 ASOS skirt you're going to see everywhere on Instagram next season
We just found the CUTEST polka dot dress, and it's only €11 in the New Look sale
Alicia Keys Shares First Snap of Son Genesis Ali Dean
You may also like
1 week ago
Emmerdale 'confirm' when Graham Foster's killer will be revealed
4 weeks ago
Emmerdale fans reckon they have figured out the father of Maya's baby
1 month ago
'It's a very strange situation': Emmerdale's Matthew Wolfenden on David and Jacob's Christmas baby plot
1 month ago
DNA shocker for Emmerdale as Maya leaves newborn on Jacob and David's doorstep
1 month ago
'It's going to have a massive effect': Emmerdale confirms major Christmas storyline for David and Jacob
1 month ago
Emmerdale's Graham Foster to be 'murdered' in explosive new storyline
Next Page