It seems he loves her even more than jam roly-polys.

Everyone fell in love with the absolute gentleman that was Harry Redknapp in I'm a Celebrity.

He absolutely stole the show and captured viewers hearts by talking about his wife Sandra. Even after he got out of the jungle, and before he was crowned King, he brought a tear to fans' eyes while speaking about his wife.

Harry said a lot of sweet and insightful things about relationships when he was in the Australian jungle, but his recent comments on Good Morning Britain have sent fans into overdrive.

Sandra and Harry have been married for an astounding 54 years, having met when they were just 17 and it's been pretty smooth sailing by all accounts Harry told hosts, Susanna Reid and Piers Morgan:

"We've never ever ever looked like splitting up. If we have an argument it doesn't last ten minutes. We don't argue and carry it on for a couple of days. You couldn't have a row with Sandra even if you tried."

Harry also addressed why marriages these days often break up as Piers alluded to Jamie and Louise Redknapp's divorce. 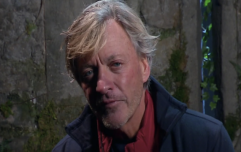 END_OF_DOCUMENT_TOKEN_TO_BE_REPLACED

"People are not compatible, it's a problem", he said. Harry continued, "We've never had that so I couldn't be an expert on that."

During I'm a Celeb, Harry told Fleur East and Sair Khan how he rings his wife up to ten times a day, and how Sandra is his life. When asked what the secret to his happy marriage is, Harry told his fellow campmates: "We just get on so well, I only want to be with her. I can never wait to see her."

popular
Woman killed in Clare crash named as Peggy Twomey, mother of Marty Morrissey
Nick Cannon's 5-month-old son Zen has passed away
Mrs Brown's Boys star Fiona O'Carroll split from co-star husband after 15 years
Someone has ranked the penis size of men from all over the world
Woman in her 90s dies after horrific road crash in Clare
Maura Higgins ends up in A&E with everyone's nightmare injury
People are losing it over Lana del Rey wearing a Shein dress on the red carpet
You may also like
1 week ago
Intruder removed from I'm a Celeb castle after security breach
1 week ago
I'm A Celeb bosses 'fear mass walkout' as three stars have medical treatment, report says
1 week ago
I'm A Celeb fans are baffled that there's been a falling out over rice
1 week ago
Two soap icons are about to enter the I'm A Celeb castle
2 weeks ago
I'm A Celeb fans were not able for Snoochie's "uterus" request during trial
2 weeks ago
I'm a Celeb trials set to be different this year, producers say
Next Page