She played Rita Doyle on the soap.

Actress Jean Costello has died at the age of 76. The news was confirmed to Dublin Live by her sister, Sylvia Murray, earlier today.

She also paid tribute to her sister on Facebook, writing: "All my love. Jean was a lady.

"At least she’s up there now keeping my nanny company, our two angels."

The legendary actress played Rita Doyle on Fair City for 24 years before making her departure in 2013. Rita was married to Bella Doyle during her time on the show, and was loved by fans.

RTÉ released a statement about her passing:

"Everyone in Fair City is deeply saddened to hear about the sad passing of our former colleague Jean Costello. Jean was a stalwart in Fair City when she played the role of Rita Doyle. She entertained the homes of millions of Irish people for over 20 years as she was one of Carrigstown's most loved characters. We send our deepest condolences to her family and wide circle of friends and colleagues. Ar dheis Dé go raibh a hanam." 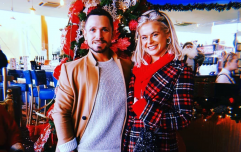 END_OF_DOCUMENT_TOKEN_TO_BE_REPLACED

The sad news comes after the deaths of Karl Sheils and Tom Jordan this year, who were also well-liked characters.

Speaking about the heartbreak co-stars suffered his year, Johnny Ward said: "People themselves are talking about him, and trying to move on but when the name Robbie comes up on the scripts everyone takes a moment to reflect.

"Especially in the read throughs because he was such a lovely guy and a character and honestly one of the nicest guys I’ve ever met and Tom Jordan the same."

popular
Boyzone's Keith Duffy set to for the next I'm a Celeb Get Me Out of Here
Alex and Ani have released a Friends collection and could we BE any more excited?
"80% of my body was covered:" LeAnn Rimes on life-long Psoriasis battle
Little Mix's Perrie Edwards tears base of spine in horrific injury
Get Out has officially dropped on Netflix and we know what we're watching tonight
Eight Of The Best Films And Documentaries On 9/11
Remember Pugsley Addams? His real-life little sister is a HUGE star
You may also like
7 months ago
Cristiano comes face to face with Will on tonight's Fair City
8 months ago
Fair City's Will Casey returns to Carrigstown on Sunday night
9 months ago
Fair City's Amilia Stewart is 'counting down the days' until she gives birth
10 months ago
Cristiano leaves Fair City tonight as he struggles to deal with panic attacks
10 months ago
Congrats! Fair City star Dave O'Sullivan has welcomed a baby boy
10 months ago
Fair City's Will finally got what was coming to him in tonight's instalment of the soap
Next Page