We all er, bopped along to MMMbop back in the day and then, well, Hanson kinda wiped off the face of the earth (for us, anyway - don't @ me).

We hadn't heard from them in ages, but in the last few years they have made somewhat of a comeback and have began touring around the world. 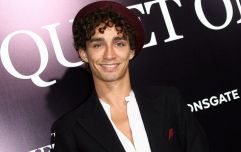 Robert Sheehan wants to start a family as soon as possible

END_OF_DOCUMENT_TOKEN_TO_BE_REPLACED

The band appeared on the Lorraine show this week and the biggest shock of all was that the three of them have 13 kids between them.

"We have 13 children - we all three have ten-year-old sons. All the kids get on as we spend a lot of time together touring and in the studio," they said.

Isaac, 38, has three children with his wife Nicola - Nina Odette, who is four, James Monroe, nine-years-old and Clarke Everett, who is 11.

Taylor, 35, was the first brother to get married in 2002. He has six children - Jordan Ezra, who is 15, Penelope Anne, 13-years-old, River Samuel, 12, Viggo Moriah, 9, Wilhelmina Jane, as well as two-month-old Claude Indiana Emmanuel.

Zac, the youngest of the three at 33, has four kids with his wife, Kate - 10-year-old John Ira Shepherd, Junia Rosa Ruth, 7-years-old, George Abraham Walker who is four and 18-month-old Mary Lucille Diana.

Girls With Goals || Her · Ep.153: Scholarship Squad - We chat to Facebook's Claire O'Hara about our Smurfit Scholarship fund.
popular
Matthew Perry's dad was a character on Friends and how did we not notice?
Irish people urged to send a hug to loved ones on National Hugging Day in aid of Ronald McDonald House
Robbie Williams "fairly sick" with Covid while holidaying in Caribbean
Gwyneth Paltrow's vagina candle "explodes" in woman’s living room causing fire
Gilmore Girls star says he didn't storm the Capitol, praises those who did
Josepha Madigan compares issues around schools reopening to Mother and Baby Homes
Seven Things You May Not Have Known About... Garth Brooks
You may also like
6 months ago
RTÉ is hosting a Late Late Toy Show singalong this month and we are so in
1 year ago
One third of pet owners say their furry friends are their 'favourite child'
1 year ago
WIN tickets to Camp Freddo and an overnight stay for a wonderful family trip
1 year ago
WIN an adventure-filled holiday at The Avon for you and the kids
1 year ago
Win 10 passes to Ireland's first Inflatable Theme Park - the all-new Inflata Zone!
1 year ago
Anti-Lego slippers finally exist and they'll be a lifesaver for parents
Next Page