She wore a beautiful pink top with groovy grey pants, and looked like a proper angel.

However, Alesha had a pretty interesting choice of accessories, and we're howling.

Viewers were pretty baffled when the saw that the judge was wearing one oversized triangle earring.

One fan said: "I'm surprised no one has started to play Alesha's earring. Why is she wearing a triangle?""Why has Alesha Dixon got one ridiculously oversized earring in?" said another.

Another wrote: "Why is Alesha wearing a triangle as an earring?"

We're honestly laughing, because it legit looks like an instrument. 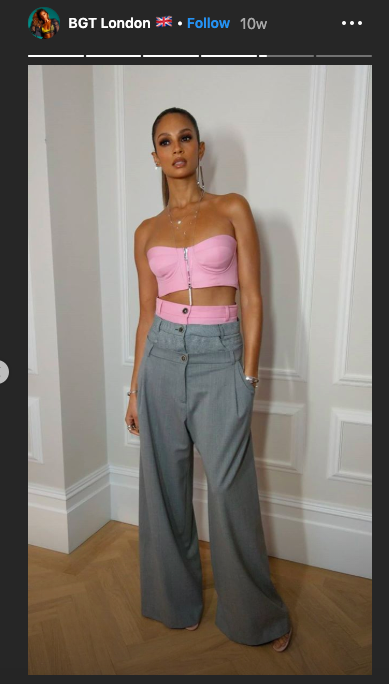 However, while many people agreed that Alesha's choice of earring, most agreed she looked stunning.

"Alesha Dixon is so fit," wrote one admirer of the star.

"Alesha is beautiful," said another.

They're not wrong, in fairness.

Alesha wasn't the only star heating up the BGT stage last night!

We have arrived ? @bgt is starting on @itv right now! #BGT

Her fellow judge, Amanda Holden, was on stage rocking a golden shirt dress, and looked so amazing.

"Yassss honey, this dress is beautiful!" wrote one person on Instagram.

Another said: "That dress is so gorgeous. Where’s it from please or who made it for you?"

popular
Anna Delvey is set to be released from prison
Primark reintroduces female-only fitting rooms after two men walk in on woman
Davide Sanclimenti opens up on having kids with Ekin-Su Cülcüloğlu as he turns down Dancing On Ice
Hilary Swank, 48, reveals she is pregnant, expecting twins
Joanne McNally is set to be on tomorrow's Late Late Show
People are being warned not to dress as Jeffrey Dahmer for Halloween
So apparently George and Mollie from Love Island aren't actually step siblings
You may also like
5 months ago
Britain's Got Talent star Johnathan Goodwin paralysed for life after stunt goes wrong
9 months ago
Britain's Got Talent star David Watson reportedly dies aged 62
3 years ago
People are trolling Alesha Dixon for a pretty weird fashion fail on Britain's Got Talent
3 years ago
This Irish lad left Britain's Got Talent viewers in tears with his incredible voice
3 years ago
Ant McPartlin returns to BGT tonight and Amanda Holden says there's one adorable moment
3 years ago
Ant and Dec got the 'family back together' for new Britain's Got Talent season
Next Page