It has been rumoured that they dated for over a year.

Hailee Steinfeld released a new song this week and fans believe it's about Niall Horan. Called the 'Wrong Direction' (which people think is a big hint that it's about the Mullingar man), the ballad features lines about cheating and having a big ego.

“I just hate all the hurt that you put me through.

"And that I blame myself for letting you.

"Lookin’ back, I probably should have known, but I just wanted to believe that you were out sleepin’ alone.

"Hold me with your worst intentions, paint it as a happy ending, every time you burn me down, don’t know how.

"For a moment it felt like heaven, and it’s so gut-wrenchin’, fallin’ in the wrong direction.” 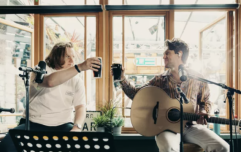 END_OF_DOCUMENT_TOKEN_TO_BE_REPLACED

The pair apparently split up in December 2018 but neither of them ever confirmed they were an item. They were, however, pictured together on numerous occasions.

Niall has also recently worked on a new album and says that a break-up made it easier for him to begin writing.

"I had just gone through a break-up, which helps when it comes to writing songs, I guess. It helps vent the emotions.

“Going through heartbreak helped write the ballads, even some of the happy songs, the sad songs that are dressed up as happy songs sometimes.”

popular
"You can’t imagine what it feels to have had a baby and yet feel like you didn’t"
Bad Sisters stars snap back at New York Times article that called them British actors
The Lion King is returning to Dublin next year
Kate Garraway gives heartbreaking update about Derek's health
Mother of missing X Factor star speaks out a month after his disappearance
Oscar winning Green Book actor found dead on New York street
Why Are Men so Obsessed With Boobs? The Answer is Pretty Surprising...
You may also like
1 month ago
A film following Niall Horan and Lewis Capaldi's Irish road trip comes out this week
9 months ago
Late Late Show fans in bits as Leona Maguire roasts Niall Horan's golfing skills
9 months ago
Niall Horan falls "extremely ill" on flight ahead of Late Late Show appearance
1 year ago
Niall Horan to headline virtual St Patrick's Day event to shine light on the pub trade
2 years ago
Niall Horan to perform special one-off virtual gig at the Royal Albert Hall
2 years ago
Dustin the Turkey responds to 'backlash' over Niall Horan Comic Relief sketch
Next Page