Woah, we did not expect this.

Last night, the MTV Video Music Awards took place in California, and it certainly didn't disappoint on the entertainment front.

From Taylor Swift releasing her new video, to Katy Perry's comeback performance, and Pink's beautiful speech to her daughter, we were kept on our toes throughout the entire ceremony. 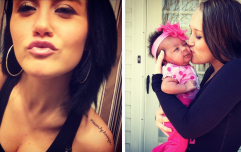 END_OF_DOCUMENT_TOKEN_TO_BE_REPLACED

However, one band that may have went a little too far is Fifth Harmony.

As their performance began and the lights went up, fans noticed that there were five figures on the stage, and if you're a fan of the group you'll know that there's only four members.

Camilla Cabello famously left the band in 2016, (and to this day, the girls can't seem to stop fighting).

And then, this happened. Just watch the figure in the middle:

Well, of course Twitter had an absolute field day watching it:

FIFTH HARMONY DID THAT #vmas pic.twitter.com/ObTD3Fh7ho

FIFTH HARMONY REALLY DID THAT #vmaspic.twitter.com/nFgj6v1zo1

popular
Vogue Williams slams man who refused to swap seats with her on plane
Mum charged with murder after allegedly leaving baby in hot car
This is the exact date the weather will get warm again
New Zealand family find two bodies in second hand suitcases
Are we getting a mini heatwave in September?
Crown Paints advert receives 200 complaints over 'misogyny' and 'everyday sexism'
Tasha Ghouri shuts down "ableist" comments of how she acts as a deaf woman
You may also like
3 weeks ago
A UK version of Are You The One? is coming to our screens
11 months ago
8 of the best red carpet looks from last night's VMAs
1 year ago
MTV's Catfish is seeking Irish cast members
1 year ago
MTV Cribs is coming back to our screens next month
2 years ago
We picked out our top 7 favourite looks from the MTV Video Music Awards' red carpet
3 years ago
This Irish woman just won a huge award in New York and we're only delighted
Next Page