Sorry to break it to you ladies, but ugh.

The rapper is receiving a lot of backlash on social media about the video, which sees him pulling up an audience member on stage and proceeding to dance with her.

According to the Daily Beast, after he dances with her, he gives her a shoulder massage and then kisses her neck.

It then looks like he reaches over her shoulders to touch her chest. 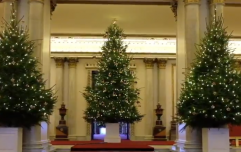 END_OF_DOCUMENT_TOKEN_TO_BE_REPLACED

Drake then asks what age the girl is to which she replies 17.

The rapper then says into the microphone: "I can’t go to jail yet, man! 17? Why do you look like that? You thick...look at all this."

He then goes on to say, "Well look, I had fun. I don’t know whether I should feel guilty or not, but I had fun. I like the way your breasts feel against my chest. I just want to thank you.”

Drake then puts down the mic, hold her hands and kisses them, kisses her forehead, cheeks and lips before sending her off stage.

Like, WHAT? Why Drake? Why be so creepy? Why?

popular
Traditional names such as Mary, Maureen, John and Michael may soon be extinct
Kylie Jenner fans are convinced she just announced her son's name
The 2 Johnnies share unbelievable catfish ordeal as woman 'targets 40 people'
Pink just announced she was pregnant in gorgeous image
Kevin Spacey charged with four counts of sexual assault against three men
Why Are Men so Obsessed With Boobs? The Answer is Pretty Surprising...
Ed Sheeran Releases Brilliant New Video For 'Bloodstream' Featuring Ray Liotta
You may also like
11 months ago
Women confront stranger who was "taking pictures" of them at the pool in TikTok
1 year ago
Former ballerina with Alzheimer’s listens to Swan Lake and remembers routine
2 years ago
WATCH: Meet 88-year-old 'Paddy Christmas' who has become a local hero for his festive lights
2 years ago
WATCH: We tried eggnog for the first time and have some very important thoughts
2 years ago
WATCH: Kim Kardashian just proved she's the chocolate connoisseur of our generation
2 years ago
Ariana Grande gets permission to sample Kylie Jenner's 'Rise and Shine' lyric
Next Page