We may just have found our new favourite YouTube channel.

As kick-ass women on TV go, they don't come much more fierce than Arya Stark. The Game of Thrones favourite can fight just as hard as the boys and in every case so far... even harder.

The character is brought to life by the fabulous Maisie Williams and now we get a closer look at the actress herself, via her brand-spanking-new YouTube channel. Maisie officially launched her channel on Tuesday with a fun four-minute Q&A "to celebrate reaching 1 million followers on Twitter. 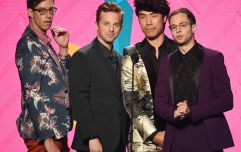 END_OF_DOCUMENT_TOKEN_TO_BE_REPLACED

Amongst the admissions: co-star Sophie Turner smells like heaven and Maisie has a boyfriend. But she's not giving away any more on that. We're totally on board with her pet peeve too.

Fair word of warning, if you're not up to speed on Game of Thrones you may not want to watch - there is a significant season five spoiler included.

popular
Here are the baby name trends set to dominate 2023
Love Island's Faye Winter says she feels like she's "failing" as an influencer
Selena Gomez calls out "vile and disgusting comments" following Hailey Bieber interview
5 delicious brunch spots around Ireland to try out on your next trip with the girls
Stacey Solomon addresses previous comments about the monarchy
Royal Family ban TV channels from using funeral footage
Andrew Le Page says Paige and Adam are still together
You may also like
3 months ago
YouTuber Melanie Murphy announces she's expecting her second child
6 months ago
YouTube singer Lil Bo Weep has passed away, age 22
8 months ago
YouTube star Melanie Ham dies after cancer battle aged 36
8 months ago
Molly-Mae Hague criticised for "tone deaf" comments about success
10 months ago
Molly Mae Hague speaks out about her home being "emptied" after robbery
11 months ago
Timothée Chalamet admits to having a secret YouTube channel
Next Page