Chloe Ferry took to Instagram today to announce she has split from Sam Gowland.

The pair who've been together for 17 months after first meeting on Geordie Shore announced the split but Chloe claims they're still good friends.

According to an insider who spoke to The Sun, they revealed that money rows caused the pair to part ways with Chloe's career taking off more than Sam's.

"Sam got jealous that Chloe’s career was taking off and his wasn’t quite as hot.

"They’d constantly row about work. He wanted to make as much money as he could and retire in two years time, so was constantly looking for ways to monetise their relationship."

However, whether this is true or not is questionable.

"It hurts me to say this but me and Sam have gone our separate ways. We are still friends.

"Things carry on as normal. Bring on Saturday for the shop opening." 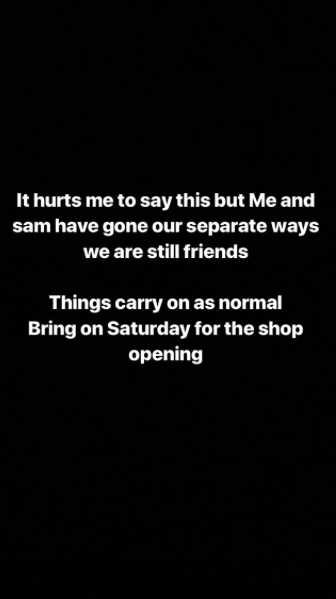 popular
Vicky Phelan says she wants to pass away in holiday home "for the kids' sake"
Scotland international rugby star Siobhan Cattigan tragically dies, aged 26
Stacey Solomon mortified after walking around shop in see through leggings
Meabh Feerick passes away after sharing that she felt "let down" by Irish healthcare system
Why Are Men so Obsessed With Boobs? The Answer is Pretty Surprising...
Norma Foley addresses concerns over schools staying closed in January
Here's the average age people lose their virginity around the world
You may also like
1 week ago
Hollyoaks' Jorgie Porter shares pain of miscarriage of quadruplets
1 week ago
Tributes paid to actor Joey Morgan who has died, aged 28
1 week ago
Camila Cabello and Shawn Mendes announce split after 2 years
2 weeks ago
Three months is plenty of time to fall in love, and to have your heart broken
3 weeks ago
Gigi Hadid reportedly met with custody lawyers after alleged fight
1 month ago
Gigi Hadid speaks out after alleged dispute between Zayn Malik and Yolanda Hadid
Next Page