The situation has escalated considerably.

Miley Cyrus has absolutely bodied Brody Jenner after he threw shade at her following her recent holiday with Kaitlynn Carter.

The pair were spotted kissing at Lake Como this weekend, just hours before Miley announced that she and Liam Hemsworth had split up.

Jenner shared an IG post of himself looking happy enough on a hill, writing: “Don’t let yesterday take up too much of today."

He also added: “Watch out! Pics of Liam and I holding hands on the beach coming soon" in the comments.

Miley then decided to gracefully take the situation into her own hands and wrote: “Go take a nap in your truck and cool off #HotGirlSummer."

A beautiful result, we can all agree. 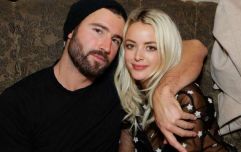 Brody Jenner makes a statement about his relationship with his ex, Kaitlynn Carter

END_OF_DOCUMENT_TOKEN_TO_BE_REPLACED

Miley announced her split from Liam over the weekend, saying that the pair had decided to focus on themselves and their careers.

One week before, a rep for Jenner and Carter also told PEOPLE that the couple had decided to end their marriage.

“Brody Jenner and Kaitlynn Carter have decided to amicably separate," they said.

"They love and respect one another, and know that this is the best decision for their relationship moving forward."

Miley has yet to address the breakup, or her relationship with Kaitlynn, on her own social media.

popular
Kate Middleton has addressed the rumours that she's pregnant with her fourth child
'Beard-baiting' is now apparently a dating trend - and we're all for it
So apparently Kourtney Kardashian is now dating 20-year-old, Luka Sabbat
Aldi is selling a €20 coffee machine that's designed to "Brew and Go"
Corrie hit with Ofcom complaints after face masks removed in hospital scene
First look: Princess Diana and Margaret Thatcher in The Crown season four
Life has changed a lot in 6 months but this Irish ad puts everything into perspective
You may also like
1 year ago
Brody Jenner and Kaitlynn Carter have broken up one year after their wedding
1 year ago
Heidi Montag had this to say about Lauren Conrad ahead of The Hills reboot
2 years ago
YES! One of the biggest stars of The Hills is joining the reunion
2 years ago
Brody Jenner is now 'negotiating' his return to The Hills and our inner teen is SCREAMING
2 years ago
Congrats! Brody Jenner and Kaitlynn Carter are officially married
2 years ago
So it looks like NONE of the Kardashians are in Bali for Brody Jenner's wedding
Next Page