Taking to social media to celebrate their big day, Dale posting snaps of the couple in their gorgeous gowns on Twitter and Instagram. 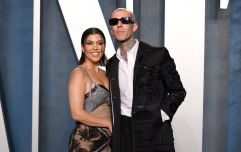 END_OF_DOCUMENT_TOKEN_TO_BE_REPLACED

Simply saying "Mrs and Mrs" on both Instagram and Twitter, Dale tagged her new wife in the snaps, showing their big day off alongside their six bridesmaids.

Stunning in a lace dress, Dale wore a gown that flowed at her waist with a deep neckline and thick straps while Dawn dazzled in a deep neckline embroider dress with thinner straps. END_OF_DOCUMENT_TOKEN_TO_BE_REPLACED

The pair clearly couldn't stop beaming either as they gazed into each other's eyes, even leaning in for a quick smooch in one picture.

Dawn and Dale announced their engagement in 2019 on Instagram, with Dawn proposing while they were on a romantic break in Connemara.

Thanks to their hilarious chats each week, both Dawn and Dale have earned themselves an army of fans since they first appeared on the popular TV show. 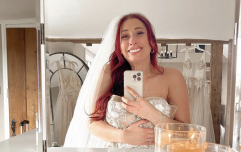 Stacey Solomon in tears as she picks out dream wedding dress

END_OF_DOCUMENT_TOKEN_TO_BE_REPLACED

In the Instagram caption, Dawn said: "Dale is stuck with me now and I couldn't be happier. Still in shock mode but it’s the best feeling to know I’m going to marry my best friend!"

While Dale added: "Forever my lobster. Never in a million years did I think I could be this happy. Last Monday (after asking my dad) @dawnietime asked me to be her WIFE."

Congratulations for the couple poured in on Twitter after their wedding pictures emerged, with fellow Gogglebox star John Sullivan saying: "A MASSIVE congrats!!! You both look stunning! That has to be our first Gogglebox wedding?! A glass of bubbles next time you're in Dublin please!"

popular
Only a matter of time before monkeypox spreads to Ireland, says expert
Wagatha Christie: Rebekah Vardy storms out of court just 30 minutes into final day
Sainsbury's evacuated after several people fall ill with breathing problems
Conversations with Friends praised for showing reality of endometriosis
Claire Byrne Live viewers in shock as woman shares family DNA secret
Denis Sulta had a cameo in Derry Girls alongside his girlfriend Saoirse-Monica Jackson
Surprise! Ed Sheeran announces he and wife Cherry have welcomed baby #2
You may also like
1 week ago
Bride and groom praised for interesting way they decided on surname
4 weeks ago
8 stunning bridal headpieces for your big day
1 month ago
Bride-to-be sparks outrage over 'no plus ones' rule
1 month ago
Brooklyn Beckham and Nicola Peltz signed the "mother of all prenups" - here's why
1 month ago
Kellie Harrington marries partner Mandy Loughlin in Dublin
1 month ago
Bride dubbed 'the devil' after strict dress code for wedding day
Next Page