Well, this is awkward.

Amy Tapper has left her family Gogglebox couch and made her way onto Celebs Go Dating.

However, when the date came to an end, things got a bit awkward to say the least. 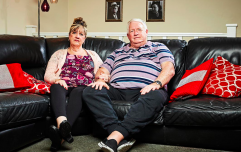 END_OF_DOCUMENT_TOKEN_TO_BE_REPLACED

Amy went on a date with a man called Ash, and when the waiter came over at the end of the date to ask who's paying the bill, Amy asks her suitor, "What do you want to do, do you want to split it?"

Which prompts him to say, "What would you like to do it's your shout?" which leads them to go back and forth with each other.

In the end, the reality star says that she's happy to split it, but Ash turns his nose up about Amy not having contactless payment on her card.

The waiter asks if she has contactless to which she replies no, when Ash quips, "How do you not have contactless?! It's 2018!"

It was just all very awkward... however, while promoting the show on This Morning this week, Amy said she's "actually quite decent at dating," so hopefully next time she'll find someone a little bit better.

Girls With Goals || Her · Ep.161: Feeling Peachy - Sharon Keegan of Peachylean on being an absolute BOSS!
popular
Bride dislocates her leg during her first dance in viral clip
Emilia Clarke is set to be the next Marvel superhero
Jennifer Lopez and Ben Affleck just became Instagram official
People are sharing why they wouldn't go on Love Island, and their reasons are gas
Cristiano Ronaldo has been called 'racist' for his latest Instagram post
Goodbye McDreamy! Disenchanted officially wraps filming in Enniskerry
Love Island fans reeling after shocking recoupling
You may also like
1 month ago
Gogglebox Ireland are looking for new cast members
9 months ago
Line Of Duty cast join Celebrity Gogglebox for Stand Up To Cancer
10 months ago
Gogglebox Ireland returns to TV tonight and there's some new faces!
1 year ago
Gogglebox viewers upset with sisters Ellie and Izzi after controversial #MeToo joke
1 year ago
Gogglebox Ireland is back tonight so cancel all your plans, tbh
2 years ago
Westlife are going to be on Gogglebox this Friday so cancel all your plans
Next Page