This year's Love Island finalists are coming home  - but there's only one man we've been looking forward to seeing.

Greg O'Shea has landed back in the London after winning the show with Amber Gill on Monday night.

The pair were greeted by hoards of fans at Stansted Airport but the Limerick lad absolutely lost his mind when he saw that his friends from home had made the trip to the UK to see him off his flight. 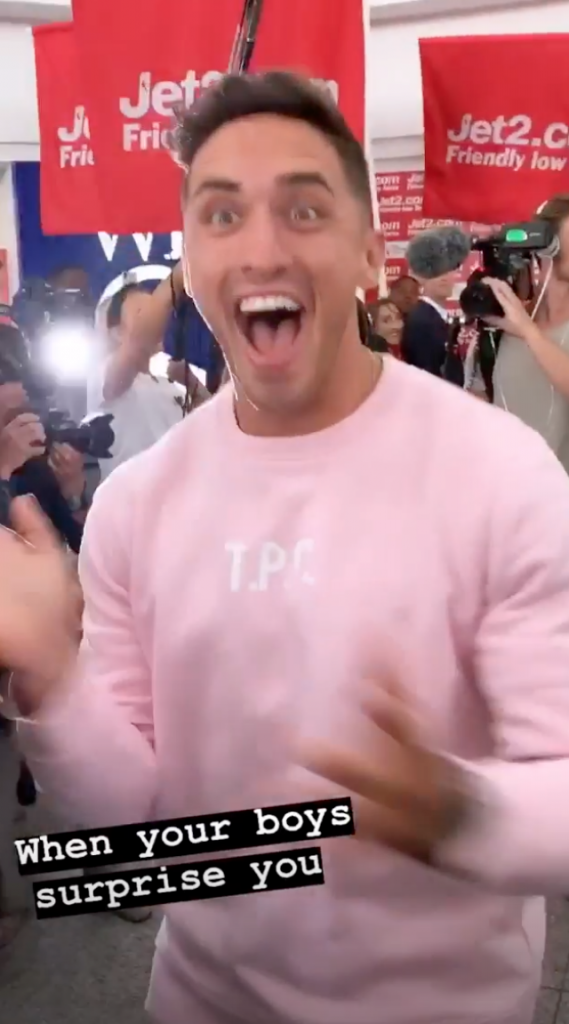 A video on his Instagram story shows Greg's mouth falling open as he sees his pals in the crowd.

The gang was spotted waving an Irish flag and chanting his name as they waited for him at Arrivals.

Posting to his Instagram page, Greg's teammate and friend Jordan Conroy wrote; "The king is back.

"Unbelievable seeing him again, we were all like proud fathers... Emotional stuff."

END_OF_DOCUMENT_TOKEN_TO_BE_REPLACED

Greg and Amber confirmed today that they're exclusive.

Speaking to CapitalFM Greg said; "We’re both very loyal and we’re definitely only going to be seeing each other."

popular
Women are rinsing their hair in apple cider vinegar – and the results are amazing
The final season of The Sinner has just landed on Netflix
New photo of Bernadette Connolly released as investigation continues
Damian Lewis pays touching tribute to late wife Helen McCrory with Irish poem
Toddler dies after being struck by vehicle in Co. Cork
"Hair contouring" is about to be huge, here's everything you need to know
YouTube star Melanie Ham dies after cancer battle aged 36
You may also like
6 days ago
Netflix shares more pictures from Bridgerton season 2
1 week ago
The third and final season of Happy Valley is in the works
1 week ago
Here is everything we know about the Desperate Housewives reboot
1 week ago
Cheer season 2 further highlights the vulnerability of its young stars
2 weeks ago
Desperate Housewives could be coming back - but what could we expect from a reboot?
3 weeks ago
10 of the best on-screen fashion moments from 2021
Next Page