He's stepping into the hosting seat once more.

Greg O'Shea has been announced as the new co-host of Virgin Media's latest rugby show. The show, which will be a rugby-based entertainment-led show will coincide with the coverage of the Six Nations.

Greg, along with Six O'Clock host Muireann O'Connell, will front the Thursday night programme which is scheduled to air after Love Island.

Since his breakout in the villa, the rugby player has become fond of the hosting seat, first stepping in to replace Eoghan McDermott while he took time off to work on Australia's Love Island.

Fresh in the forest ?

He was a major hit sitting beside Doireann Garrihy on the 2FM breakfast show, however he recently told Her.ie that he doesn't want to go down the route of a traditional Islander. 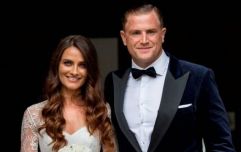 Jamie Heaslip and wife Sheena have welcomed their first child

END_OF_DOCUMENT_TOKEN_TO_BE_REPLACED

"What I want to do now is use my profile to do something good, so I've kind of gone a bit against the grain of what a normal islander would do," he says.

"I'm at the age now where I can really invest in myself (...) so I'm kind of taking that time because I don't know what I'm doing anymore," he says. "I don't really know where I'm going to go."

"[But] I'm happy with what I'm doing. It might be a bit different and weird, but I'm happy."

popular
10 Dublin restaurants with outdoor areas we'll be hitting up for the next 3 weeks
WATCH: Simone Biles just did a triple backflip, a move not even recognised in women's gymnastics
Mars to change name of Uncle Ben’s rice to Ben’s Original
The Christmas movies TV channel is launching this week
Celebrating A Birthday Today? You Might Become A Porn Star In Later Life
New documentary sheds light on hidden sexual violence of the Irish revolution
Here's what happens on every day of your menstrual cycle (roughly)
You may also like
6 months ago
Matches and makeup: the 19 year old Ulster pro rugby player juggling sports with the salon
10 months ago
"I finally got my chance to play for Ireland - then I went into contact and my leg just broke" Rugby star Ciara Griffin shares what it took to achieve her dreams
11 months ago
You can get breakfast delivered to your door ahead of the match on Saturday
1 year ago
The official starting Irish team for the Rugby World Cup has been announced
1 year ago
World Rugby drops gender references from World Cup titles
1 year ago
Connacht Rugby announces three-year sponsorship to encourage more young girls to play rugby
Next Page