Here are all of the rumoured Islanders for winter Love Island

Are you ready for winter Love Island?

Because we definitely are.

The days are cold, grey and veering on the gloomier side - so, the idea of having six weeks filled with conversations about recoupling, cracking on and not putting all your eggs in someone's basket sounds really tempting to us.

There's just over a week to go until the new series begins, and a whole new batch of Islanders will be heading into the South African villa.

Here are all of the people who are rumoured to be heading into the villa for winter Love Island.

Ellis was one of the first Islanders rumoured for the winter Love Island series.

"Ellis is over the moon about it - he's had to be sworn to secrecy about it but he's been in to meet producers a few times and they love him - he can't wait to get in the villa," a source told The Sun.

And late last year, reports emerged that Jay - an ex-footballer-turned-model-and-presenter - would also be headed into the South African villa.

He was said to have been in talks for the summer series, however producers reportedly thought it would be better to have him in the winter series.

"Jay will be the one all the girls will be chasing. Just like Tommy Fury, he’s a sportsman, in good shape and has dreamy looks," a source previously told The Daily Star.

Alisha is an Instagram influencer with plenty of celeb pals and and more than 100,000 followers.

Producers reportedly think that Alisha would be the "perfect fit" for the winter series, with her "fun-loving personality, positive body image, large fan base and legion of celebrity pals."

"Alisha is exactly the type of contestant ITV2 are looking for – she's gorgeous, body confident and isn't afraid to be herself," an insider told The Daily Mail. 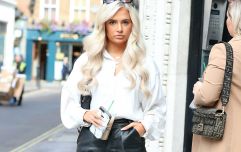 Have we really come all that far since #BeKind?

END_OF_DOCUMENT_TOKEN_TO_BE_REPLACED

She was said to be in talks to be heading into the villa last season.

And Rochelle Humes' little sister Sophie is once again tipped to be one of the singletons headed into the villa in the hopes of finding love.

"ITV2 bosses are hoping she will be the star of this series," an insider told The Sun.  "She’s got a really bubbly personality, plus they love the famous link.”

Following his firing from The Apprentice, Kenna told The Mirror that he would be keen to head into the Love Island villa.

Although, he noted, it wouldn't be to find love.

"Yeah that's on my to do list! Not to find love, obviously," he told the publication.

He's been long tipped to be on the show, but Katie Price's ex Charles Drury is unlikely to be entering the villa any time soon.

In a post over the holidays, he paid a gushing tribute to his girlfriend Lucy - whom he called "the best present to finish off the year."

"Finding what I’ve found in you has made me realise what I want in life and give me reason to try my hardest to be the best version of myself," he said.

Following the massive popularity of Dani Dyer and Belle Hassan - Danny Dyer and Tamer Hassan's daughters respectively - producers were said to be keen to have Emily on the show.

In a piece for The Sun late last year, Emily revealed that she had been approached to take part for the show.

"I am so not Love Island," she said, as she explained that she had a boyfriend of eight years.

popular
10 Dublin restaurants with outdoor areas we'll be hitting up for the next 3 weeks
Tried and tested: 3 sheet masks that seriously impressed me
WATCH: Simone Biles just did a triple backflip, a move not even recognised in women's gymnastics
The Christmas movies TV channel is launching this week
Here's what happens on every day of your menstrual cycle (roughly)
WATCH: Netflix to release documentary on the Watts family murder
Scientists discover potential “game changer” that “could help eliminate Covid-19”
You may also like
3 weeks ago
ITV announce new dating show, The Cabins, to fill the Love Island hole in your heart
1 month ago
Everything you need to know about season two of Love Island USA
2 months ago
Love Island's Lucie and Luke have confirmed they are, indeed, dating
2 months ago
Maura Higgins: "You always hear men talking about sex, why can't I do the same?"
3 months ago
Winter Love Island has officially been cancelled
1 month ago
Tributes pour in for RuPaul's Drag Race star Chi Chi DeVayne, who has died, aged 34
Next Page