It sounds like the start date for I'm A Celebrity...Get Me Out Of Here is soon and we are VERY excited.

The reality TV show is always a major hit every year and there's been a lot of talk about it this year as Holly Willoughby is set to replace Ant McPartlin on this year's show.

The This Morning co-host will co-present alongside Declan Donnelly and this is sure to make for a different dynamic as fans of the programme are used to the banter between long-time colleagues Ant and Dec.

We're very much looking forward to it all the same and it doesn't sound like we'll have too long to wait.

Chatting on today's This Morning, Holly gave a major clue about when the new series will start.

According to OK! magazine, Holly's co-presenter, Philip Schoefield said that Holly only has today and tomorrow on the show before taking holidays for a mid-term break with her children. 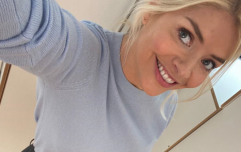 END_OF_DOCUMENT_TOKEN_TO_BE_REPLACED

Holly agreed with him and said "half-term with the kids and then off to the jungle" which would suggest that the show kicks off the week after next.

She also said that things were getting very "real" as she had a run-through of the show to practice everything and that sounds like we don't have very long to wait at all.

Today, it was confirmed that Rochelle Hayes would fill Holly's This Morning shoes while she's away in Australia with the former Saturdays star saying that she's really excited about the presenting role.