Robert Sheehan wants to start a family as soon as possible

He says that he would love to be a dad.

Irish actor Robert Sheehan, most known for his part in Misfits, has opened up about his intentions to start a family. In a recent interview, he said that he would love to get started as soon as possible.

Speaking to the RTÉ Guide Robert said: “Well yes, if the swimmers comply. I’d love to be a dad.

“I was holding Tom and Laura Hopper’s baby yesterday and it was so nice. I really want one, my ovaries are glowing.”

He said that recently, he was talking to a friend of his who said to start a family young, which made him think about having kids in the near future.

“You know I was talking to my mate Duncan, we’ll drop the name, why now, Duncan Jones, who directed me in Mute, and he’s 47 or so and has just had his second child and he said ‘Robert, if you can get started on the kids earlier do. I’m knackered.’” 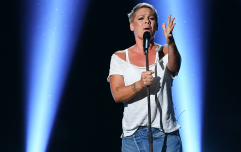 Pink's children made her a homemade Grammy and honestly, TOO cute

END_OF_DOCUMENT_TOKEN_TO_BE_REPLACED

He also said that while he is enjoying his life right now, the older he gets the more "restless" he is, which is why he has turned to meditation.

“I think that I’m getting more restless as I get older. That’s why meditation is good for me because it reminds me that I don’t have to be constantly doing that.”

“It’s not necessarily running away from anything. Luckily, I don’t have many demons that I quarrel with. Meditation teaches me how to be OK with myself, be OK with no noise or distractions.”

Girls With Goals || Her · Ep.153: Scholarship Squad - We chat to Facebook's Claire O'Hara about our Smurfit Scholarship fund.
popular
Matthew Perry's dad was a character on Friends and how did we not notice?
Irish people urged to send a hug to loved ones on National Hugging Day in aid of Ronald McDonald House
Robbie Williams "fairly sick" with Covid while holidaying in Caribbean
Gwyneth Paltrow's vagina candle "explodes" in woman’s living room causing fire
Gilmore Girls star says he didn't storm the Capitol, praises those who did
Seven Things You May Not Have Known About... Garth Brooks
Josepha Madigan compares issues around schools reopening to Mother and Baby Homes
You may also like
6 months ago
RTÉ is hosting a Late Late Toy Show singalong this month and we are so in
1 year ago
One third of pet owners say their furry friends are their 'favourite child'
1 year ago
WIN tickets to Camp Freddo and an overnight stay for a wonderful family trip
1 year ago
WIN an adventure-filled holiday at The Avon for you and the kids
1 year ago
Win 10 passes to Ireland's first Inflatable Theme Park - the all-new Inflata Zone!
1 year ago
Anti-Lego slippers finally exist and they'll be a lifesaver for parents
Next Page