He's been popping up on social media again.

Rob Kardashian has been keeping a low profile for a couple of years now. The reality star stayed completely out of the limelight for some time after a very dramatic few months.

There was a time when he was on TV, on every social media platform and on everyone's lips - and not for entirely great reasons. 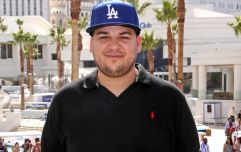 Rob Kardashian has a new girlfriend... and she looks a LOT like a past ex

END_OF_DOCUMENT_TOKEN_TO_BE_REPLACED

With everything that went on with his ex-girlfriend Blac Chyna and the failed TV show they both filmed, he was never seen - even as his family remained very public.

However, he might be making a small comeback as he was seen twice on Instagram last week.

It was quite a busy time for the Kardashian-Jenner clan with parties going on left, right and centre - plus there was a lot of Halloween madness.

Rob was out celebrating his sister, Kendall Jenner's birthday, and then posted a picture of himself dressed up with his mum, Kris Jenner.

A source also told E! News that he is making better decisions in his life.

"He has cut down fast food and has completely changed his diet. He also stopped drinking, which is really helping him. He is feeling a lot better and seeing results," they said.

Hopefully this is the beginning to a new and improved Rob.

popular
The internet is saying the same thing after Ryan's Toy Show opening
The best memes from this year's Late Late Toy Show
Vicky Phelan says terminally ill people should have right to decide how to die
8 of the hottest make-up trends to try this festive season
We finally know what happened to Sam in And Just Like That
What is the 'yassify' trend and why is everyone doing it?
First Look at David Seaman and Frankie Poultney's Wedding...
You may also like
3 years ago
Kylie Jenner shares first look at newborn Chicago in baby reveal video
3 years ago
People think Rob Kardashian may have revealed Kimye's baby name early
3 years ago
Make it STOP! Kylie posts a picture of her holding a newborn on Snapchat
4 years ago
Blac Chyna drops all Kardashian sisters except one from her lawsuit
4 years ago
Blac Chyna is suing the Kardashians for physical abuse over nude pics
4 years ago
Dream Kardashian's safety reportedly being assessed by child welfare
Next Page