In probably the most unexpected celebrity pairing of 2019 so far, Jack Whitehall has been linked with Paris Hilton.

Yep, really - the British comedian has reportedly been seeing Paris after catching her eye at the Brit Awards.

Jack flew over to L.A. recently and attended Paris' 38th birthday party, according to The Sun.

The socialite shared photos of herself and pals including Kourtney and Kim Kardashian celebrating but hasn't posted any photos of Jack.

The pair did hang out together with Jack visiting her at home, according to a source.

The comedian "spent time in her swimming pool splashing around on an inflatable unicorn", which is exactly what any sane person visiting Paris Hilton at home would do.

"Paris thinks he's gorgeous and they've been hanging out as she wanted to get to know him better," a friend of hers said. 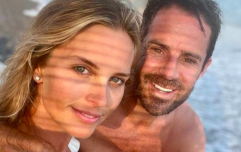 END_OF_DOCUMENT_TOKEN_TO_BE_REPLACED

She's also been posting flirty emojis on his Instagram lately - the most 2019 way to let someone know you're into them.

Jack was previously in a relationship with Crazy Rich Asians star Gemma Chan while Paris recently ended her engagement to actor Chris Zylka.

popular
Woman killed in Clare crash named as Peggy Twomey, mother of Marty Morrissey
Nick Cannon's 5-month-old son Zen has passed away
Maura Higgins ends up in A&E with everyone's nightmare injury
The Daly Dish's Gina introduces newborn baby Gene to the world
Mrs Brown's Boys star Fiona O'Carroll split from co-star husband after 15 years
Woman in her 90s dies after horrific road crash in Clare
QUIZ: How well do you remember the first episode of Sex and the City?
You may also like
5 days ago
Alec Baldwin says he "didn't pull the trigger" in first interview since Halyna Hutchins' death
2 weeks ago
Tributes paid to actor Joey Morgan who has died, aged 28
2 weeks ago
Camila Cabello and Shawn Mendes announce split after 2 years
3 weeks ago
Three months is plenty of time to fall in love, and to have your heart broken
1 month ago
Gigi Hadid reportedly met with custody lawyers after alleged fight
1 month ago
Gigi Hadid speaks out after alleged dispute between Zayn Malik and Yolanda Hadid
Next Page