Jade Thirlwall has reportedly split from her boyfriend of three years

It seems like Jade Thirlwall and Jed Elliot have split up. The pair have reportedly parted ways after three years together.

According to MailOnline, the pair decided to go their separate ways due to their various work commitments.

"Jade and Jed have decided to end the relationship. There is honestly no big drama, it has just sadly run its course. They spent so much time apart as Jed is on tour constantly in the USA with his band The Struts.

"And obviously Jade is super busy with Little Mix promo - and about to start a massive LM5 Tour. The split is amicable and they remain mates." 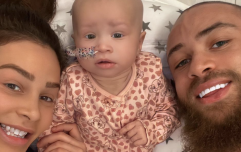 END_OF_DOCUMENT_TOKEN_TO_BE_REPLACED

The singer previously opened up about how they never got to see each other, and months went by at a time until they could reunite. She told The Mirror that the Christmas period was the only time they were able to spend time together.

“We’ve been together two years but it feels like we’ve only just started going out because we never see each other. It’s been a bit sh*t not seeing each other I must admit.

"I’m going to try and see my boyfriend over Christmas, we don’t see each other very often."

popular
Traditional names such as Mary, Maureen, John and Michael may soon be extinct
Toddler drowns in swimming pool while on holidays in Costa Blanca
The 2 Johnnies share unbelievable catfish ordeal as woman 'targets 40 people'
This is how much Kourtney and Travis' wedding cost
Singer Cliona Hagan marries Simon Sheerin in Athlone ceremony
Kevin Spacey charged with four counts of sexual assault against three men
Vogue Williams opens up about being cheated on by "asshole" boyfriend
You may also like
3 months ago
Woman dumps older boyfriend after Googling his house
4 months ago
Jason Momoa and Lisa Bonet split after 17 years together
4 months ago
Greg O'Shea confirms split from girlfriend after two years
6 months ago
Men suffer more emotional pain after a break up than women - apparently
6 months ago
JoJo Siwa confirms split from girlfriend Kylie Prew
7 months ago
Wait... Are Maura Higgins and Giovanni Pernice back together?
Next Page