Jameela Jamil tweeted images from a magazine that are commenting on the image of several celebrities.

The pictures are part of an article called “Best & Worst Beach Bodies” and they show celebrities Mariah Carey, Rebel Wilson, Queen Latifah, and Lea Michele trying their best to have a nice day at the beach.

The unidentified magazine, however, insists on attacking and shaming their “flaws” all in the name of entertainment. And yet again, girls are made to feel like they can’t go to the beach unless they’ve only eaten salads for the year.

END_OF_DOCUMENT_TOKEN_TO_BE_REPLACED

Jameela lashed out at the magazine and at how it perpetuates a negative body image for women. She said that these articles go against everything that she is trying to gain from her “I Weigh” Instagram account.

On the Instagram account, Jameela encourages women to see themselves in a positive light and to be proud of and happy with who they are as a person and not to judge themselves based on weight or anything else that the media deems important to self-worth.

The tweet calling out the magazine has received loads of attention and people are up in arms over the article comments.

One user expressed her disgust at how body-shaming articles like this still exist. She points out that not even smaller-sized people are safe from fat-shaming.

How dare people do this. It’s been going on since I was a kid, we should be better than this by now. And are they really doing that to Lea Michelle who weighs like 90lbs soaking wet, pointing out skin roles. This is a disgrace. This is why young girls have body image issues

Another Twitter user commented on the article’s dig at Lea Michelle when they said that her “biggest rolls” were on her stomach.

One of the most revolting captions in the article is the one referring to Queen Latifa simply as a “beached whale”. One Twitter user initially responded to the article with some dry humour but was serious in his disgust for the Queen Latifa insult. Us too.

The bottom left caption is horrendous

Is it too much to hope for a day when girls can pop to the beach for a quick dip without being judged? We hope not.

But for now, shout out to Jameela for being out there, fighting the fight. You go, girl. 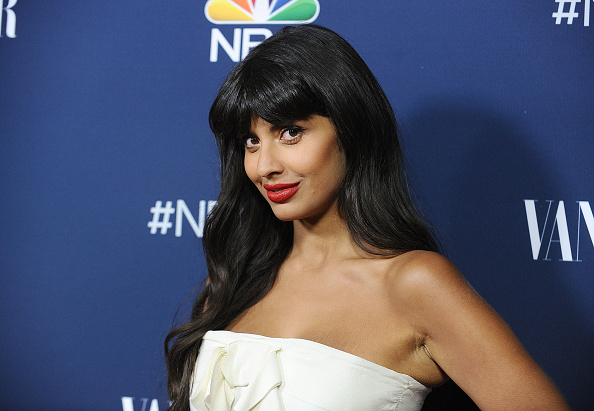 popular
The Daly Dish's Gina introduces newborn baby Gene to the world
Jess Redden and Rob Kearney jet off on their honeymoon after "incredible" wedding
Why Are Men so Obsessed With Boobs? The Answer is Pretty Surprising...
15 signs that prove someone is falling in love with you
Gwen Stefani reportedly pregnant with baby number four
WATCH: The new star-studded trailer for the Harry Potter reunion show is here
Here Are The Top 20 Most Common Pin Codes in The World
You may also like
1 week ago
What is the 'yassify' trend and why is everyone doing it?
3 weeks ago
Woman 'rolls down mountain', leaves hilarious review about her 5-star leggings
1 month ago
Gogglebox's Paige Deville never wants to speak to mum again after quitting show
1 month ago
Irish The Chase star hits back after fans claim he loses on purpose
2 months ago
Woman charged fee for "brief emotion" during mole removal
2 months ago
9 of the best memes from when Instagram and WhatsApp were down
Next Page