We love a good romance.

James Corden recently opened up about meeting his wife, Julia Carey, and it's actually a very cute story.

He was at an event with the actor Dominic Cooper, and Dominic introduced him to his future wife.

He said:"Hi Jules you might be the most beautiful woman in the world.

"And she said, 'Well, thank you very much. That sounds like something you say a lot'.

"And I said I have never said it before in my life. That was it. That was it, really. I was in,” he explained before adding, “And by an absolute miracle, so was she.” 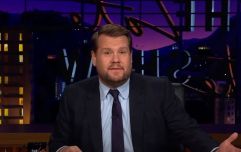 END_OF_DOCUMENT_TOKEN_TO_BE_REPLACED

“We both sat in the corner of a bar/restaurant, Dominic was off getting into trouble and we sat and very jokingly planned the rest of our lives together an hour and a half after we met as a joke."

James and Julia have been married for six years now and have three children together, Max, Carey and Charlotte.

They welcomed Charlotte late last year with James taking to Twitter to say: "Today we welcomed a beautiful baby daughter into the world. Both she and her mother are doing great. We can’t stop smiling.

"Thank you Harry for stepping in to host the show at 2 and a half hours notice!" And yep, that was when Harry Styles stepped in for him.

popular
He may be a politician, but Leo Varadkar's personal life is none of our business
Fans are feeling seriously sorry for Molly Mae Hague after resurfaced interview
Kelsey Parker: "People think I should be walking around wearing my black veil"
"I slept with your fella": Vogue speaks out about ex's cheating
Parents told to stop buying selection boxes for kids- here's why
Woman hit by rollercoaster wakes from coma after two months
Dundalk restaurant offer free Christmas dinner to those in need for third year running
You may also like
1 month ago
James Corden apologises after being abusive to restaurant staff
7 months ago
James Corden announces he's leaving The Late Late Show
1 year ago
Petition to keep James Corden from starring in new Wicked film hits 25,000 signatures
1 year ago
WATCH: The Friends cast do James Corden's Carpool Karaoke - with a twist
1 year ago
Prince Harry praises Netflix's The Crown, says it's "loosely based on truth"
1 year ago
Prince Harry is going to be on Carpool Karaoke soon, apparently
Next Page